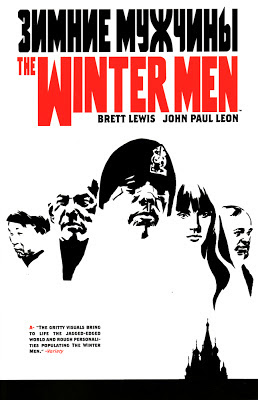 
In the modern, post-collapse Soviet Union, criminal gangs rule under the aegis of a crumbled government, and old soldiers roam the streets...as do old superheroes.  One such man is Kris Kalenov, a former member of the Russian elite military force 'Red 11', now a Moscow policeman.
Caught up in a kidnapping case, Kalenov encounters the dark heart of the New Russia at every turn, bringing him into conflict and allegiance with friends and enemies alike as he searches for both a missing girl, and the secret of the Soviet super-project codenamed 'Winter'. Author Brett Lewis and artist John Paul Leon ("Static") present a tour-de-force graphic novel soaked in vodka, blood and sweat.

'The Winter Men' is a stark, violent tale set in Soviet Russia with criminal gangs ruling the streets, the military roam the street aimlessly but as do old super heroes. All of them are mixed up between a violent kidnapping and trying to find the secrets behind the Soviet super project named 'Winter'.

Full of twists, turns and memorable characters, this graphic novel manages to be highly original and definitely worth reading.

The way the story combines both the kidnapping and the attempts of the characters to find out the hidden secrets is absolutely superb. Not much does the reader feel over whelmed with the information flying at them or with the amount twists and turns.

At times the writing style really made me think of 'The Watchmen' on many levels yet it still came across as incredibly original.

The language itself really comes across as real and flowing. The reader really keeps his eyes glued to the page because of how well written the dialogue is.

The artwork itself is stark, bleak and depressing. I loved every single frame of it. I'll be honest and tell you all that I hadn't actually heard of John Paul Leon but after seeing his work here, I will definitely be getting more of his work.

I can't really go much in to the plot line without giving it away so I'll just say one thing. Get this graphic novel. It is absolutely fantastic and well worth picking up.