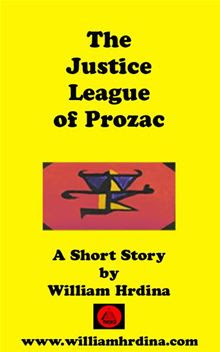 It's not easy being a superhero, especially when you have to go to counselling sessions.

This short story, now available as an E-Book, delves in to the psychological side of being a superhero with comical results.

When I downloaded this on to my Kobo E-Reader, the write up and reviews made me really excited to read this.  I thought I was going to find a clever and witty spoof of superheroes and their motives for being who they are.

What I found was a story that didn't really go anywhere and had mixed up characters, along with quite a few spelling mistakes.

While the spelling mistakes are unforgiveable, from both an authors point of view and an editors point of view, the writing wasn't atrocious.  It just didn't seem to live up to the promise of the synopsis on the website.

However one of the things that it did succeed at was making me wonder what the author would be like with a full length novel so I'll be checking that out at some point.

It is a bit of a shame, however that it didn't live up to the promise of the idea.  The character of the doctor was the best by far and I did enjoy the little twist at the end.  However, the well known characters, while a satire of their real selves, do tend to fall a little flat.

The other thing that annoyed me was the fact that some of the characters were barely used.  Take Wonder Woman and The Hulk for example.  I won't get in to the fact that some of the characters are from the DC universe and some are from the Marvel universe because, to be honest, that didn't really bother me that much.  It was actually the fact that the aforementioned characters were mentioned once and then not again.  That's always been an annoyance to me.  If you are not going to use a character then why include it in a story.  The Hulk is mentioned as having destroyed Manhattan and then mentioned about again when he struggles to open a little packet of milk for his coffee and that's it.  If there was any character that was ripe for a satirical yet psychological look then it was him.

That said, for a short story, it flows pretty well and the couple of parts that I did like were very well done so considering it's available for free as a digital download then give it a go.  You might like it.  Just ignore the couple of spelling mistakes in the story.

Posted by Pat Scattergood at 11:03