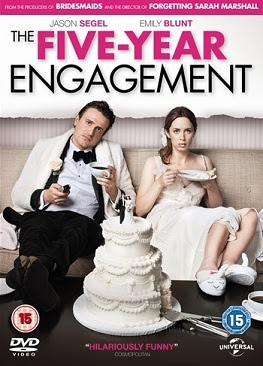 One year after meeting, Tom proposes to his girlfriend, Violet, but unexpected events keep tripping them up as they look to walk down the aisle together.

After watching Jason Segel in 'The Muppets' and in the television series 'How I Met Your Mother', I wondered what he was going to appear in next.

When it was announced that he would be making a romantic comedy I have to admit that I was less than thrilled by the idea.  A lot of todays romantic comedies all follow the same, safe and quite frankly boring formula and that leads to being able to know exactly what was going to happen next.

When I put this in to my DVD I was massively surprised.  Not only did it NOT fall in to most of those cliches that plague this genre but it managed to both make me laugh like crazy and fall completely in love with the characters themselves.

Jason Segel has made a living out of playing likeable characters that try hard no matter what matter what life throws at them and it's easy to see why.  He plays that part so incredibly well that you can't help but get behind his character and will him to succeed.  It's the same here.  The character of Tom Solomon isn't a suave ladies man or a cool guy with trendy things.  In fact, he's a bit of a dork and massively relateable.  Everybody knows someone like Tom in real life and that is what makes the character work so well in this movie.

Emily Blunt plays the part of Violet superbly and really has a hell of a lot of chemistry with Segel.  In much the way as Amy Adams was with Segel in 'The Muppets', the two of them just seem right as a couple no matter what obstacles get thrown at them, especially in the shape of slimeball tutor Winton played with glee by Rhys Ifans.

The writing here is spot on and really makes the viewer laugh with absolute glee.  At the same time it manages to be intelligently written in that it really feels like you are watching a real relationship unfold before your very eyes.  The characters are hilariously written but that's not even the main strength of the movie.  That's the simple fact that it takes unpredictable twists and turns all while being remarkably heart wrenching.  Some of the scenes here absolutely broke my heart and brought a tear to my eye with how intelligently and beautifully written they were.

Unfortunately the special features let the DVD release down in that there is only a gag reel, albeit a really funny one, some deleted scenes and some extended/alternate scenes.  I would have liked to see a little bit more in that aspect like maybe a look at the various cameo appearances or even a look at the writing team of Jason Segel and Nicholas Stoller.

All in all, if you want an intelligent and witty romantic comedy that is both heart felt and realistical in it's portrayal of a relationships up's and down's then I would highly recommend this.  If you are a Jason Segel fan too then this is a fantastic purchase for your collection.