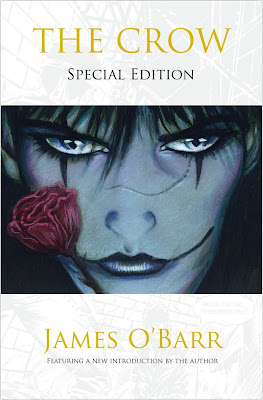 
The definitive author's edition of the classic graphic novel of love, vengeance and ultimately, redemption.
After the murder of his fiancee by a vicious street gang, a man rises from the grave to wreak bloody vengeance upon those who wronged him. Fully remastered and revised by artist James O Barr himself, the timeless story of The Crow (also made into the cult movie starring Brandon Lee) returns in a new author s edition with over sixty pages of previously unseen material, including new story pages!

'The Crow' by James O'Barr has always been regarded as a modern classic in the comic book world and that reputation is well deserved.

Here, O'Barr himself has released a revised version of that story, which is his eyes is the definitive version of the now well known story.

The story of vengeance that Eric Draven embarks upon after the murder of his fiancee and himself is heartbreaking and exciting at the same time. Yes it is a very violent story in itself but it also has a rich heart at the center of it.

The original version was, in my eyes, an absolute classic. A well told story with stark yet beautiful artwork. Here, O'Barr has done the impossible. He has made his magnum opus, his classic, even better.

Released with not only a new introduction by O'Barr himself, there are thirty pages of unseen and unreleased artwork including a new closing segment called 'Sparklehorse', which was absolutely gorgeous, and an entirely new scene called 'An August Noel' that was incredibly touching and really showed the couples relationship.

That's not all that has been added however. Lots of new sequences that were long believed lost have been restored using the artists original technique.

All the new parts and restored parts sit perfectly next to the original artwork and not once feel out of place. This is still a beautiful, heartfelt story that it felt like an absolute treat to be reading the authors own definitive vision.

A truly essential purchase for both 'The Crow' fans and for fans wanting their first taste of James O'Barr's heartbroken, gothic and strangely hopeful story of redemption and revenge.

Posted by Pat Scattergood at 13:00