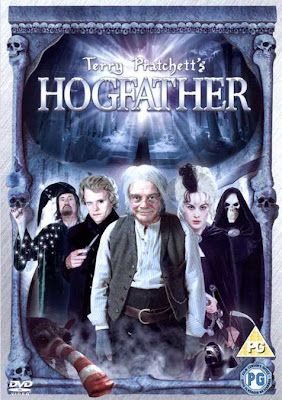 
Based on Terry Pratchett's worldwide best selling fantasy book, Hogfather is set on the semi-medieval but strangely familiar Discworld. And the Hogfather (you know, the jolly fat man) who delivers presents to the kiddies at Christmas at the midwinter festival of Hogswatch has gone missing. But it's vital that all the presents are delivered, otherwise the sun won't rise tomorrow. However, there is another supernatural entity who can be everywhere at once and, most importantly, knows where everybody lives. He is Death, but with a false beard and a few cushions that he reckons might just work.

Terry Pratchett has always been one of my favorite authors and I am firmly in the camp that this is one of his best novels.  It's full of chaotic fun, great characters and tons of excitement all while having a really sweet heart at the middle of it.  Hence I was quite worried about how well they would be able to bring it to the screen.

I need not have worried about Terry Pratchett and Vadim Jean have combined to create an absolutely fantastic adaptation of the novel that manages to retain all the things that made the original story so enjoyable.

The cast is absolutely fantastic, look for a cameo by Pratchett himself as a toymaker, and they really bring the characters to live in such a way that they quite literally jump off the screen.  The choice of the always great Ian Richardson as the voice of Death was a sublime bit of casting.  Now whenever I read the novels that involve the character, I hear his dialogue in Richardson's voice.

David Jason as Albert, Death's long suffering companion, was a great choice because his world weary and cynical performance really combines with the Death character to create a great chemistry between the two of time.

I would be remiss if I didn't Marc Warren as Mr Teatime, he really gives the character a sense of menace but in a slow, deliberate way without being an over the top and stereotypical bad guy.  A great performance.

The special features are great on this two disc set, especially the really interesting 'Making of' documentary.  I hope for a little bit more in the way of special features but the things here are pretty fun.  I did like the inclusion of the podcasts though, I've not seen that on a DVD release before.

All in all I would definitely recommend this to Pratchett fans, fantasy fans and pretty much anybody with a sense of fun.  It's a fantastic two part movie.