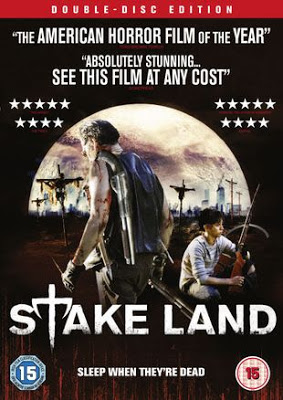 In the highly acclaimed Stake Land, hailed by some critics as "the American horror film of the year", the US has become a lost nation.

When an epidemic of vampirism strikes, humans find themselves on the run. Cities are tombs and survivors cling together in rural pockets, fearful of nightfall. When his family is slaughtered, young Martin (Connor Paolo) is taken under the wing of a grizzled, wayward hunter whose new prey are the undead. Simply known as Mister (Nick Damici), he takes Martin under his wing on a journey through the locked-down towns of America's heartland, battling against not only feral vampires but also the fanatical savagery of the right wing religious cult known as The Brotherhood, in search of the fabled safe haven, New Eden.

Let's get one thing straight from the start.  In 'Stake Land', vampires do NOT sparkle.  In fact, they will rip off your face as soon as look at you.

Don't dismiss this as a normal, bog standard vampire movie however.  It's a bleak, dark dystopian future where the virus isn't the only thing that has destroyed the world from the inside out.  It's the people themselves.

While battling vampires of all shapes and sizes, a lot of the fear comes from the humans that there left.  In fact, a lot of them are even more barbaric then the vampires and in a way, even less human than their fanged counterparts.

The best, if that's the right word to use here, of these are the religious zealots called 'The Brotherhood' led by the gloriously menacing and evil Jebediah Loven.

Loven, played here by Michael Cerveris, is a character without a single good bone in his body and that lack of conscience is what makes the character so menacing and evil without once falling in to  cliche.  In fact, during the movie he unleashes some of the most evil acts and not the vampires and that's one of the things that makes this movie effective.  The casting of Kelly McGillis, yes the lady from 'Top Gun', was absolute genius.  She plays the part of Sister with such a grace and poise that she is the perfect ying to the yang of Damici's portrayal of Mister, a quiet vampire hunter who takes the newly orphaned Martin under his wing to ensure his survival.

Talking of effective, the characters are incredibly well written by Mickle and Damici.  So well writen in fact that you honestly care about everything that happens to them no matter how big or small.  My heart was in my mouth whenever they were in danger and that hasn't happened to me with a movie for a very long time.  The relationship between Mister and Martin is the core of the movie and rightfully so.  This is more a movie about their bonding and protecting of each other.  The vampires / religious zealots are a side line.

The special effects are done in all their bloody glory and really stay in your mind long after the movie has ended.  The effects are incredibly visceral, which along with the superb cinematography, really make you winch each time.

The special features here are fantastic for this set and really set the tone for the movie itself.  I would watch them before the movie, obviously, but they go in an absolute ton of information and background stuff.  My personal favorites being the look they give you at the special effects and the two totally different commentaries.

All in all, this is an absolutely superb and well written vampire movie with a real heart at the middle of it that makes you really care about the characters.  Their plight moved me to tears on more than one time and at the same time, even made me jump with shock as well.

One of the best vampire movies I have ever seen,

Posted by Pat Scattergood at 09:18