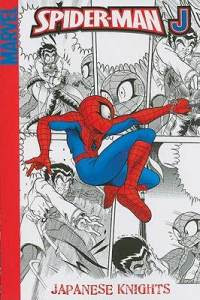 Originally only published overseas, Spider-Man J enjoyed a large following of loyal readers following his adventures against adversaries such as General Wasperus.

Now fans here can enjoy Spidey's manga-styled adventures, collected here for the first time in America and translated for your reading pleasure!

I've been a massive fan of the Manga style comic books coming from Japan for a long time, especially when they do their own take on the Marvel or DC superheroes.

When I saw this take on Spider-Man, one of my personal favorites out of the Marvel world, I was quite eager to read it.

What I expected where heroic tales of Spider-Man's exploits against his rogues gallery of enemies. What I didn't expect was the sheer bizarre nature of these tales.

None of the usual enemies make appearances here. Yet that doesn't bother me. Instead Spider-Man J has to do battle with robots and creatures of a bee-like appearance. Some of the tales really are quite off kilter but I feel that adds them a certain charm that you wouldn't get with an American Spider-Man graphic novel.

The art itself is very well done and the Manga style really does suit the characters. The action scenes are well drawn and easy to get track of all the characters, which sometimes isn't the case in a Manga release.

There are certain little annoyances however that do take away a point or two from the overall rating. While not a big thing, Peter Parker in this release is a very young little boy and for some reason, maybe I'm so used to the American Peter Parker, that makes me think of this tales in a Power Ranger type of style.

The bizarre nature of the stories sometimes leave the reader thinking, what the hell just happened. However I feel that maybe that's down to the translation perhaps.

Other than that these tales, while a little strange, are a fun ride. Buy if you would like to see a completely new take on Spider-Man.