Spider-Man: The Icon by Steve Saffel 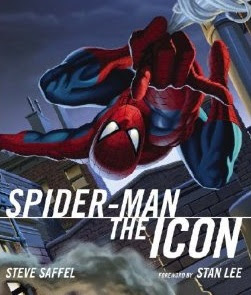 Written By Steve Saffel With a Foreword By Stan Lee


Steve Saffel Presents The History of a Comic Book Legend.

An illustrated and very indepth look at the history and origin of one of the comic book worlds most beloved characters.

With a foreword by the creator Stan Lee, you will never have seen a super hero discussed in such detail!

The foreword by Stan Lee pretty much guarantees what the reader is going to expect from this massive book yet it his foreword is written with such love and affection for one of his creations that it really gets you excited about what is to come in the book.

The introduction by Steve Saffel is written in such a way that he sounds like the sort of fan that you could sit down with and talk about Spider-Man for hours without getting even remotely bored. In fact his introduction says more about this book than I could ever possibly have began to say.

This book is a hefty walk through the history and legacy of one of the best known comic book icons in the world today. That may sound like something that could be a bit of a downside these days before of everybody’s seemingly ADD attention spans yet it’s written in such a way that it doesn’t once feel like a chore or even a history book.

Steve Saffel writes about the entire 50+ year long life of Spider-Man in a brilliantly informative way and with such passion that you can’t help but want to turn the page to see what you will find out about next. No stone is left unturned either. He writes about the various incarnations in the comic books, the television shows, the movies even every possible type of spin off imaginable. Some of which, have to be seen to be believed!

One of the things I liked the most was the use of various Spider-Man comic covers. Whereas most writers would have just gone for the most famous or most iconic, that’s not the case here. There are some real gems used. Like the first appearance of The Hulk, in which he was a furry creature not a big, green giant like he is now. There are even production sketches of characters and prototype characters that didn’t make it in to the comic books as well. The sheer depth of information here is staggering. In fact, the best way to describe this book is that it’s exactly like an the treasure cave in the Aladdin story. No matter where you look, there’s something incredible to catch your eyes. All in all, I urge every comic book fan out there, and not just the Spider-Man ones, to get this book and get it as soon as possible. It’s that damn good!