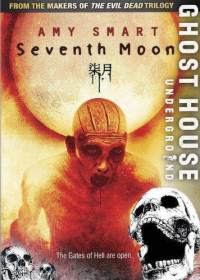 Melissa and Yul, Americans honeymooning in China, come across the exotic 'Hungry Ghost' festival. When night falls, the couple end up in a remote village, and soon realize the legend is all too real. Plunged into an ancient custom they cannot comprehend, the couple must find a way to survive the night of the Seventh Moon.

Eduardo Sanchez.  A man who will no doubt go down in horror movie history as being the man who created the now infamous 'The Blair Witch Project' movie that had everybody completely convinced that it was read thanks in part to some intelligent movie making and some genius strokes of marketing.

However here, he has done something completely different.  He has taken an old Chinese myth concerning ghosts coming back to the land of the living every year on the seventh month and made a movie that is both claustrophobic and affecting.

Unlike the movie 'Altered', which he also directed, this one doesn't disappoint.  It starts with a slow and methodical pace before kicking in to gear when the ghosts arrive and then slowing back down as Melissa deals with the aftermath of all that has happened.

The fact that a lot of the scenes are shot on what appears to be a handheld camera, is both it's strength and it's weakness.  The chase and violent scenes are so claustophobic and feel really closed in because of that decision, which really brought what was happening on the screen to live.  It really gave it a realistic 'holy crap I'm scared' feeling that the characters were no doubt experiencing.

Another thing I liked was the fact that a couple of times, things happened slightly out of focus which really gave it a ghostly, other worldly feel to proceedings.

However there were a couple of scenes where the hand held work just didn't seem to gel.  Not in a massively bad way, I just found it slightly distracting.

The writing, while not exactly world beating, does it's job and really moves the story along well.  The relationship between the married couple is told in little bits here and there at the beginning and you are shown them talking about the future, making wises and seeing the sights but then it's stopped suddenly as all Hell breaks loose.  Literally.  I liked that decision because it felt like a good analogy for the marriage itself in that anything could come along and tear them apart so they have to stay together to be strong.  Albeit, the 'anything' are killer ghosts.

The cast do portray the characters in a nice refreshing way in that they don't suddenly become gung ho heroes in the face of adversary because of the ghosts appearances.  They are terrified, cowardly and even start to get angry at one another in a realistic way and the performances really show that well.

Amy Smart as Melissa, does a superb job as the 'damsel in distress' role during the movie and doesn't fall in to the trap of being meek and helpless yet doesn't do the Sigourney Weaver route of being a badass killer either and that made a nice change for this genre.

Tim Chiou as Yul, gives a good performance as Melissa's husband and really shows some great chemistry with Smart.  They really do look like a young married couple out to have fun on their honeymoon without coming across as annoyingly sweet or cliched.

I was disappointed with the lack of special features however as there was only a trailer included.  There are loads of interviews with the cast and crew online talking about the movie itself so I don't understand why they couldn't have just stuck a couple of those on to the DVD too but such is life.

All in all, 'Seventh Moon' is a well paced and exciting psychological ghost story that really makes an interesting look at the Chinese myth that it's based on.  Well worth checking out horror fans.

The only reason it's got a low score here is the lack of special features.