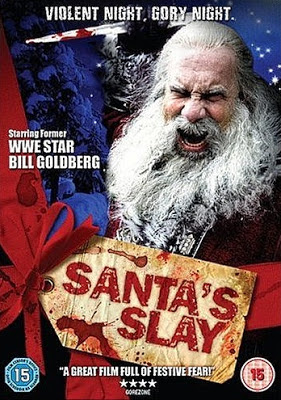 Let's get one thing straight. This is a film about Santa being a demonic serial killer. There's no way in hell to take this film seriously and neither should you do such a thing. You'd be missing out on a hell of a lot of fun.

Bill Goldberg, the former WCW and WWE wrestler, does a pretty good job as Santa and seems suitably menacing.

One of the things that made me laugh like a crazy hyena was the fact that the sleigh was pulled by 'Hell-deer', which I thought was a nice touch as was the opening of the movie where Santa kills a family all played by various Jewish celebrities such as James Caan and Fran Drescher. All met very funny ends at the hand of Santa and was a nice nod to Goldberg being Jewish as well.

Overall some of the other acting in the movie isn't up to much but it's a b-movie so what more can you really expect? It's not like it's going to ever win an academy award or anything.

Another thing I liked about the movie was the music. Some of the songs really set a tone of fun to the movie and really added to the other feel.

All in all, if you want to just switch off and laugh yourself coarse then this is the movie for you. It's just a shame about the distinct lack of extras.