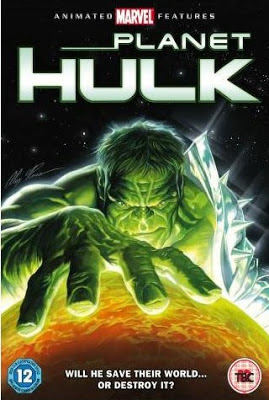 A whole new world of hurt! Betrayed by Earth's heroes and exiled into outer space, the man-monster Hulk has landed on the distant planet Sakaar, ruled by the tyrannical Red King.
Sold into slavery, Hulk becomes the Green Scar, the planet's mightiest gladiator - but his new masters get more than they bargained for.

Review
The 'Planet Hulk' storyline written by Greg Pak was and still is one of my favorite storylines in the Marvel Universe. It took the Hulk out of the small rut it had got in to and made the character interesting again.

Here, the animated adaptation of that story is released on DVD with an absolutely superb voice cast who bring the story to life.

The movie itself is quite faithful to the original comic book story except for a couple of little changes here and there. Most of those changes are minor but they had to swop The Silver Surfer with Beta Ray Bill due to a licensing problem but that's the only major one.

The changes don't really affect the story all that much. The battles are fantastically done and really exciting without being too muddled. In fact, some of the battles even look like their comic book counterparts.

Story wise, the writing is very well done and you can really see how important the original story was to Greg Johnson, while he adapting it for the screen.

The voice acting is fantastic and really brings the characters to life. In fact, it made it near impossible to not get really involved in the story itself. The twists and turns are well done without being telegraphed, even managing to be surprising. I say surprising because most of them I was already aware of because of the simple fact that I had read the story in the past yet they were so well adapted that I was still surprised by some of the twists.

The special features, while quite interesting, are a little sparse in themselves. The making of featurette was pretty good but it just felt like there was something missing.

All in all, I'd honestly say that this is an essential purchase for both Marvel and Hulk fans. It's a very good adaptation of one of the best of the recent Hulk stories so well worth a look.
Movie 4
Picture 4
Sound 5
Special Features 3
Overall 16/20