My Turn By Norman WIsdom Review 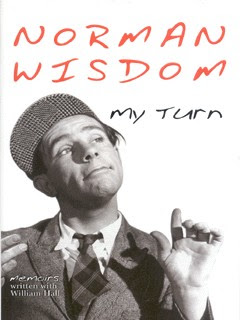 Norman Wisdom's early years could easily have come straight from the pages of a Dickens novel. Left by their frightened mother, ill-treated by a brutal father, Norman and his brother were forced to fend for themselves, sleeping rough in London and stealing food to survive. This is a rags to riches tale of the man Charlie Chaplin said would take his mantle and who went on to make millions laugh around the world for over five decades. Here are the hardships, tragedies and triumphs that gave him his inspiration. From the days working the seasons at Scarborough, to the unforgettable and endearing character Norman Pitkin - the little man in a tight fitting suit, read of his rapid climb up the showbiz ladder.

Norman Wisdom is a comedy legend.  There is no denying that and this autobiography tells the story from his incredibly hard childhood right up to his glory days.

The beginning of the memoirs, written with William Hall, are completely heartbreaking and even had me in tears more than once.  The story of the Christmas that he spent alone had me absolutely sobbing my eyes out and wanting to go back in time to give him a hug.

Yet through all that, the autobiography is told with a warmth and a humor and with such a clear and simple writing style that it honestly felt like you were sat opposite him while he was telling you all of this.  That really gave this memoir a very personal feel and makes the reader go on an emotional rollercoaster.

The more upbeat stories had me howling with laughter and amazed at how down to Earth Norman came across even after stories of meeting Laurel and Hardy, Audrey Hepburn, Vera Lynn and many more.  It was pretty much a who's who of the comedy scene of that era.

Another thing I liked were the stories of his movies, how they got made, the friendships he made along the way.  There were so many little tidbits about some of the biggest movie stars of the era that it was like a veritable treasure trove of information.  My personal favorite being the story of when he went to America and met his hero, Charlie Chaplin, who went on to give him his seal of approval by saying that if anyone would fill his shoes then it would be Norman Wisdom.  The amazing level of pride at Chaplin's approval really tugs at the heart and even makes the reader pleased that Norman Wisdom got the career that he worked so hard to get.

As one of the biggest comedy legends this country has ever known, he deserved a good tribute.  This autobiography is definitely that tribute and feels like the perfect epitaph for such a long lasting, influential career.  Highly recommended.