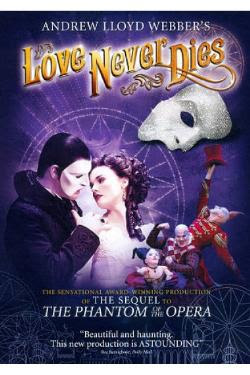 Having relocated to a vivacious amusement resort in Coney Island, The Phantom of the Paris Opera House uses a pseudonym to invite renowned soprano Christine Daaé to perform. She and her husband Raoul have no idea what lies in store.

As a gigantic fan of the original 'Phantom of the Opera' as well as the many movie versions of the classic novel by Gaston Leroux, I was very excited to hear that musical legend Andrew Lloyd Webber was going to make a sequel to his own music version.

Is this one up to the high standard of the original Webber musical?  Not by a long shot.

Is this a good quality musical?  Hell yes.

While the songs aren't as memorable as the original songs, they still really match the settings of the story and the cast really do a fantastic job with them and with the dialogue itself.

Talking of the cast, this stage show filmed in Melbourne, is absolutely brilliant.  The Coney Island setting of the musical gives rise to a veritable treasure chest of circus performers and strange happenings.  There's a real Tim Burton feel to some of the scenes as well.

Talking of scenes, the stage settings are amazingly beautiful in a period and gothic way.  It's almost as if they use them as another character in the proceedings.

I loved the idea of the return of The Phantom, played here with aplomb by Ben Lewis, and the story really does execute the idea really well.  The suspense and menace that is bubbling just under the surface really ramps up the sense of forboding that the stories brings forth.

While the critics that slammed this production as being nowhere near as good as the original are right in some parts, I really feel that's an unfair criticism.  Nothing could ever match the sheer quality of the original 'Phantom of the Opera' stage production.  This is still a fantastic quality musical that Andrew Lloyd Webber fans will absolutely love and I really enjoyed it.  Well worth picking up to see the continuation of the sage of the 'Phantom of the Opera'.