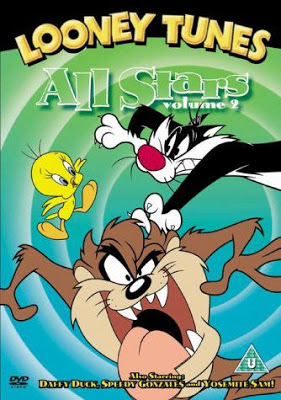 Written By Various
Directed By Chuck Jones and Various Others

The stars of the classic 'Looney Tunes' cartoons from Warner Brothers are back again for a collection of hilarious hi-jinx that only they can get in to.  This set contains the cartoons:

The 'Looney Tunes' cartoons have always been some of my favorite cartoons since I was a kid right up to now that I am an adult.  In fact, I even share watching them with my son and he loves them too.  That's goes to show that you don't need long winded stories or CGI animation to keep somebodies interest.

The cartoons here are a superb selection of their classic tales with only two of them being a little disappointing.

'Early's To Bed' starring the little known Gambling Bug character, while funny doesn't seem to go anywhere when put next to the other cartoons in this set.  It's the same problem with 'Lumber Jerks', although that one is by far the worst culprit for that.

It's not all bad however, there are some absolute classics too.  'Broken Leghorn', 'Kit For Kat' and 'Canary Row' are by far the best ones on this set.  They had both myself and my little son absolutely howling with laughter.  Just look out for the scene where a Sylvester tries to convincingly imitate a monkey for proof on just how great the animation is.

Sadly, the Bugs Bunny cartoons are a slight let down in this set.  Normally you can count on good ol' Bugs to provide the funniest moments in these sets but the ones included here just seem to be slightly off quality wise.

'Bugs and Thugs' doesn't seem to get started.  In fact it felt a bit like a car spinning its wheels.  You could see the ideas where there but it just didn't work.  It's the exact same problem with 'Devil May Hare' although the problem with that one was the simple fact that it ran out of steam halfway through and that led to a random as hell ending that fell a bit flat.  'Bunker Hill Bunny' is the best of his three appearances, although once again it doesn't seem to go anywhere.  That said though, it at least continued the long running feud between Bugs and Yosemite Sam.

The picture and sound transfers here are for the most part fantastic.  You could see a slight bit of print damage here and there but it isn't enough to be distracting.  Then again, what do you expect from something of this age?  I honestly think the cartoons here have been transferred brilliantly.

The special features are brilliant and have some great little treasures here and there.  The commentaries are superb and even though they're not on every single cartoon, the ones that are included are very interesting.  How they manage to get so much information and background stories in to such a short period of time without it sounding cluttered just goes to show how much care they have put in to making these sets.