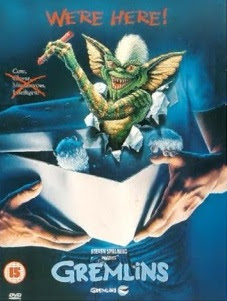 Minature green monsters tear through the small town of Kingston Falls. Hijinks ensue as a mild-mannered bank teller releases these hideous loonies after gaining a new pet and violating two of three simple rules: No water (violated), no food after midnight (violated), and no bright light. Hilarious mayhem and destruction in a town straight out of Norman Rockwell. So, when your washing machine blows up or your TV goes on the fritz, before you call the repair man, turn on all the lights and look under all the beds. 'Cause you never can tell, there just might be a gremlin in your house.

The 1980's has recently been an absolute goldmine for nostalgia nuts.  Some of the movies being rewatched deserve their statuses as cult, 80's classics and others not so much.

This one however is most definitely one of the few that is truly deserving of it's status and then some.

Produced by the legendary Steven Spielberg, 'Gremlins' has always been a personal favorite of mine due to the sheer brilliance of how the movie combines both the horror aspects and comedy aspects so well that it's instantly enjoyable.  There are scenes that are most definitely keeping with Dante's pitch black humor that he is so known for, especially in his earlier movie 'The Howling'.  The violence really clashes with the dark humor but not in a bad way.  While combining horror with comedy wasn't a new thing when this was made, this is one of the more unique additions to the genre and that is down to the writing and directing partnership of Columbus and Dante.

The cast do an absolute spot on job with the quick witted  dialogue but it's not them that steal the show by any stretch of the imagination.  It's the Mogwai.  Created by Chris Walas, the Gremlins / Mogwai were and still are massively memorable, especially that of the heroic Gizmo and the evil Stripe.

With so much information about this movie online and so many interviews floating around with the cast and crew talking about this classic 1980's movie, it's a real shame that there aren't any special features at all in this release.  I would have loved to have seen a making of or even a couple a couple of interviews but alas, it obviously wasn't meant to be.

The picture and sound transfer here is really good for a movie from 1984, the sound especially being very clear.  If you listen to it carefully then you can even hear the small sounds here and there of the world going about it's business as the carnage goes on around them.

All in all, this is an absolute classic slice of 1980's cinema and of the horror/comedy hybrid that was so popular.  Well worth picking up, especially if you are a fan of Joe Dante's work.  His trademark dark humor is there as are some great performances.  Just ignore the quite low score because that is simply down to the fact that there are no special features.