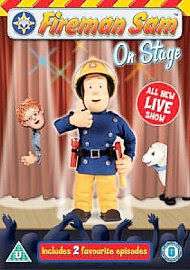 Pontypandy is gearing up for a fun day held by the local firestation but when Sam and Elvis are called to a flood at Dilys' shop, things start to quickly go downhill.

My son is a massive fan of the three versions of the 'Fireman Sam' television series so when I found that there was a live stage show on DVD I got it for him.

What we ended up with was a bit of a cheesy stage show but with a good message for children about fire safety and who to call should anything go wrong.

The performances, while done wearing costumes and big heads, are actually pretty true to the characters in the animated show enjoyed by my son so he enjoyed the characters here.

One of the best things about this stage show is that it is incredibly interactive.  You can join in with the songs and there are even dances and actions that the little ones can get up and join in with.  While the songs are largely forgettable to someone like me, they're very catchy and grab the children's imagination pretty well. especially when combined with the interactive side of things.

The story itself is a mixture of a couple of episodes from the television show but it doesn't come across as disjointed.  Instead it seems like the story is all meant to be together.  There are some funny scenes of slapstick style comedy that had my little lad in stitches.

The special features are quite clever for the little ones.  There's a Fireman Sam quiz about the stage show that has three questions.  If you get the three questions right, you get to see two episodes from the television show.  While that may not sound like it has a lot of replay factor, it's a great way for the children watching to join in and feel like they have been rewarded with a little treat.

All in all, if you have a child that is a fan of 'Fireman Sam' then they will love the excitement of the stage show and the fact that they can join in with the actions and the songs from the musical.

Considering you can pick this up pretty cheap, it's well worth it to keep the little ones entertained for an hour or so.