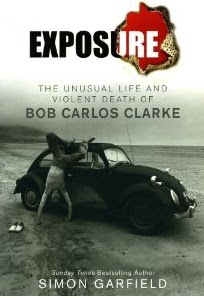 
A biography of one of the world's most controversial and revered photographers.

The New York Times Best Selling Author Simon Garfield, brings to us the biography of one of the greatest yet most tragic photographers of our generation. Known for his sexually charged photographs and for his rock and roll lifestyle, he quickly became revered for his iconic work.

But at the height of his fame, depression and paranoia lead him down the path of self destruction and he sadly took his own life at the age of 55.

What a complete disappointment this book was. Bob Carlos Clarke was one of the most colorful and interesting photographers of his generation. Full of life and eager to shake up the status quo of the then stale photographic world.

Yet the author here has written this book as if scribbling in a notepad. There are quotes and snippets from the people that knew of and knew Clarke yet it just doesn't flow. It's like trying to listen to five conversations at once.

Another major and quite frankly unforgivable sin that this writer has committed is that for the first half of the book, Clarke is barely mentioned and when he is, it's in passing in a 'he knew such and such a person' way. Considering it is Bob Carlos Clarke that is the subject of the book, that's a major error on the authors part.

The only reason that this biography is getting as high a mark as it is, is the simple fact that the parts that actually do bother to be all about Clarke are incredibly interesting and don't whitewash any of his flaws.

I'm really not sure how they managed to take such an enigmatic and interesting person such as Clarke and made the story of his life and career in to such a bland biography but they managed it.

All in all, I'd avoid this biography and just buy one of Clarke's Autobiographies such as 'Shooting For Sex' instead.
Posted by Pat Scattergood at 02:16