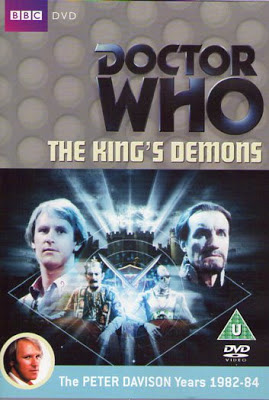 England, March 1215. King John is visiting the castle of Sir Ranulph Fitzwilliam. The arrival of the TARDIS disturbs a medieval joust, but the Doctor and his companions are proclaimed to be friendly demons by the King, who seems strangely interested in their "blue engine." It soon becomes clear that neither King John or his Champion, Sir Gilles Estram, are who they pretend to be. One of the Doctor's oldest and deadliest enemies threatens the future of democracy on Earth, and he must be stopped!

Peter Davison as The Doctor has always been a bit hit and miss for me.  He suffered from the same problem as the current incarnation of the Doctor, played by Matt Smith, suffers.  A good actor and portrayal of the character but the stories aren't really up to the normally high standard.

Here that isn't the case, although this two part story is a bit of a weird one.  Firstly, The Master's plan to sully the reputation of the king and thus preventing the creation of the Magna Carta.  On one hand, the plan isn't up to the normal universe threatening plan that the Master is normally known for but on the other hand, the prevention of the creation of the Magna Carta would still be a big thing due to it's creation being a catalyst for the formation of democracy in England.  The idea of the Master having a robot, named Kamelion, that can change in to anybody it wants to was a fascinating idea on paper yet it's execution didn't quite work but for this story, that addition added an extra layer to the story itself.

The cast do a great job with the dialogue here and really add an air of excitement to the story.  They also make good use of the historical settings and the culture clash between the people there and the Doctor along with his companions.

The special features, while not as numerous as other Doctor Who collections, are pretty interesting and really give a good quality inside look at the making of the two part story.  The best of these is a look at the robot used to create Kamelion.  I loved the fact that it wasn't a sugar coated look at the idea, instead it was an honest, sometimes brutally so, look at how an idea can look fantastic on paper but be found lacking in execution.

While not the best Doctor Who story of Davison's career as the Doctor, neither is it the worse.  It's a fun Doctor Who tale with a historical setting that is a good way to spend an hour.  Worth picking up for the fan's amongst us.