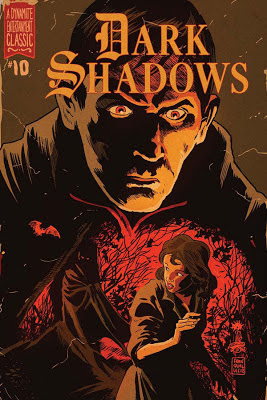 After the shocking events of issue 9, Barnabas is recovering from his battle with Lockwood but with Emma still missing and the unspoken threat of Lockwood still hanging over his head, what is going to befall the Collinwood estate next?  Will Barnabas be able to survive another run in with Lockwood?  Will Emma ever be found?  Find out the answers to these questions and many more in this, the 10th issue of 'Dark Shadows'.

For me, issue 9 of 'Dark Shadows' was by far the best of the run.  Combining the long running storyline involving Lockwood and Barnabas' battle with guily about his bloodied past, the writing was intelligent, affecting and exciting.

It's the same here.  Once again Mike Raight has created a story that not only acknowledges the past events in such a subtle way but also gives an exciting glimpse in to the futures of the characters and the estate itself.

In a very stylish touch, Raight has portrayed Barnabas differently in the way he has written the character itself so that he is different to the 'vampire version' of the character.  It's as if they are two completely different people.

The ongoing disappearance of Emma is very well handled here, complete with a shocking ending, written with such a deft and gentle hand that you really want to see just what has happened to her.  The ending, that I mentioned earlier, has left me absolutely excited about seeing issue 11 because I really want to see where they are going to take this storyline.

That's not the only storyline running here either but I don't want to say too much about that one in case it becomes too much of a spoiler.  All I'll say here is that it involves a murder being witnessed and we'll leave it at that.

One of the things I have liked about this run of 'Dark Shadows' is the simple fact that multiple storylines are all running at the same time yet because of the strength of the writing, not once does the comic feel cluttered or disjointed.  I really like the fact that all the characters have their own things going on but not all is revealed straight away.  It creates a good sense of suspense and that doesn't happened very often with the 'quick fix' style of writing that seems so popular in comic books at the moment.

The artwork here, while not up to the very visually impressive work in issue 9, it's still really good.  The only thing I didn't like was the fact that the art here didn't concentrate as much on the little things, the little details, and that's what made the art in the previous issue so impressive.

Overall, I would say that the huge momentum set by issue 9 is definitely kept up and I for one cannot wait for the next issue of this impressive comic book series.