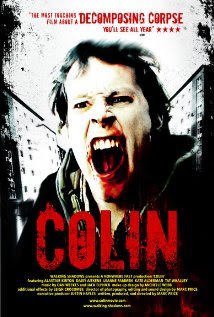 Already a worldwide phenomenon with huge coverage of the film since it premiered at the Cannes Film Festival, first time film-maker Marc Price has made a film like no other before it - told through the Zombie's (Colin) perspective.

Our hero Colin is bitten by a Zombie; he dies and returns from the dead. We follow him as he wanders through suburbia during the throes of a cadaverous apocalypse.

Shot at locations in both Wales and London, Colin has more than its fair share of gore, along with several ambitious set pieces including a broad daylight zombie vs. human street battle and an epic housebound siege. It is also an exploration of who Colin was when he was alive through the objects, places and people he becomes attached to.

Review
After reading so many positive things about this movie and how good a job the filmmakers did with only a £45 budget, I have to admit that I was excited about seeing a zombie movie for the first time in a long time.

I was definitely fooled by the hype machine.

What we have here is a poorly shot, poorly lit movie with really bad performances.

That's not to say the movies a complete loss, just close to it. The budget is clearly evident in the way the movie has been made but they do a couple of impressive things with it. There's a housebound siege as well as a zombie vs human street battle but the good is far out weighed by the bad.

The sound is absolutely atrocious and you can sometimes barely hear what is being said. Another thing that really put me off of watching the movie was the sheer shaky nature of the camera work. I know they filmed it in a way to make it seem claustrophobic in places but the constant movement of the camera made it really difficult to watch.

The performances were another thing that made the movie seem a hell of a lot longer than it actually is. Especially with the final half hour that felt like it was longer.

All in all, I was really disappointed with the movie. I knew that it wouldn't live up to all the hype because most movies don't but I didn't realise that it would fall so flat.

I've given the special features a 1 for the simple fact that there weren't any. The box said that there was a commentary track included on the release but there wasn't.

I'd avoid this one because to be honest, I liked the premise but the execution was just dull and lifeless. Pun intended by the way.
Movie 1.5/5
Picture 2/5
Sound 1.5/5
Special Features 0/5
Posted by Pat Scattergood at 08:16