Batman: Whatever Happened To The Caped Crusader? Graphic Novel Review 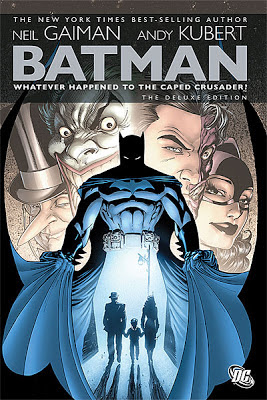 
New York Times" Number 1 best-selling author Neil Gaiman takes on The Dark Knight!
Neil Gaiman, co-creator of "The Sandman" and writer of "The Graveyard Book", re-teams with his collaborator on Marvel's 1602, superstar artist Andy Kubert, to tell the story that delves into life, death and the afterlife, leaving no stone unturned and exploring every aspect of The Dark Knight's life and crime-fighting career. This tale parallels the classic "Superman: Whatever Happened to the Man of Tomorrow?" epic, written by Alan Moore.

Neil Gaiman, co-creator of the epic comic book series 'The Sandman', turns his hand at breaking down the Dark Knight psychologically in this tour de force of a story.

In this release, Batman is dead. Yes you read that right. The Batman is dead yet he is overseeing his funeral. Each member of his life, both good and bad, comes up to the front and tells a different story of his death, every one of them different.

Neil Gaiman has always been the go to guy for intelligent and interesting writing with a bit of an off kilter edge to it and that's no different here. The way he breaks down each facet of the character of Batman himself as well as his interactions with everyone ranging from friends to mortal enemies is just masterful. Each page throw up a surprise or a shock yet was written in such a way that it didn't feel rushed or too crowded.

Also, the way he lends his pen to the writing of the now familiar and well loved characters is another massive plus. He sticks to the template of the characters, keeping the things that make them the fantastic characters we all love to read about, yet manages to put his own spin on them without his style clashing at all.

The artwork by Adam Kubert just flies off of the page. In fact, the way he channels the classic styles of so many classic Batman artists yet still makes the panels his own is just superb. In this, the deluxe edition, there are some fabulous sketches by Kubert himself.

At the end of the main story there are also a series of other stories too. Each one as brilliant as the last. My favorite of these is the story entitled 'A Black and White World' in which Batman and The Joker meet while waiting for their next comic book scene to be ready. While that sounds completely ridiculous, it works completely.

Here, Neil Gaiman has done something amazing. There's not, in my opinion, a single missed step in his writing. I would honestly hold this in as high regard as the classic release 'Arkham Asylum: A Serious House On Serious Earth', it's really that good!