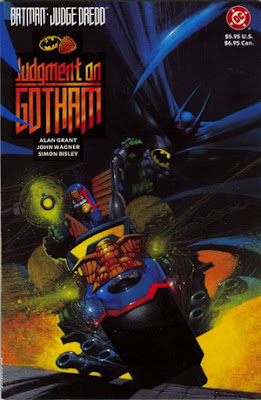 
Judge Dredd, the ultimate lawman in 22nd-century Mega-City One, comes head-to-head with Batman, the Dark Knight Detective from Gotham City.

While the war rages, the alien superfiend, Judge Death, takes advantage of the situation.

I've always found cross overs a bit hit and miss. For every good one there always seems to be a really awful one.

However this one is definitely one of the good ones, although there are some faults here and there that stop it from reaching five stars.

Judge Dredd doesn't interact that much with Batman as I would like but that may just be down to the length of the story. However when they do, it's very well written and exciting.

Judge Anderson seems to interact more than Dredd with Batman but that's fine as I've always thought of Anderson as one of the most well rounded characters in the 2000AD world.

The enemies that they end up having to work together to bring to justice work well as a team. You have Judge Death, The Scarecrow and Mean Machine all working together at certain parts of the story and the fact that the writing makes it feel like they have always inhabited the same universe.

The only other thing that bugged me was that the story itself was a bit short. That's not to say it's a bad story because it's not. It just seemed to be getting really exciting and then it ended. That's a minor complaint though.

The artwork by Simon Bisley is superb as always. I especially loved the little touches he added to Batman himself such as the grey hair when he's unmasked etc. It made the character seem tired and more human and that definitely added a new layer to it. I really enjoyed how he made The Scarecrow look like complete and pure evil as I have always thought of Scarecrow as one of the more under rated characters in the Batman universe.

All in all, an absolutely fantastic graphic novel and I, for one, will definitely be on the look out for the other Dredd and Batman cross overs.