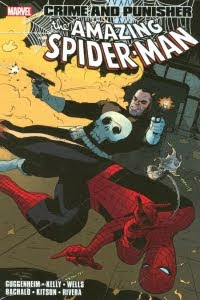 
WHATEVER HAPPENED TO FLASH THOMPSON? A powerful story taking Peter Parker's former nemesis and Spider-Man's biggest fan from the avenues of New York to the war-torn Middle East along with his fellow brothers in the US Army.
And then, as the Mayoral election ramps up, gang activity is at an all time high...Mr. Negative's newest enforcer, Hammerhead, works to bring all the gangs under one banner - or else! With some of the kids from Aunt May's F.E.A.S.T. center caught in the crossfire, Spidey stands up to his old foe... but Hammerhead's got some new tricks and even Spider-Man can't stop him this time!

When I bought this collection of 'Spider-Man' stories, I was actually really excited about reading it. Plus from the title, I thought it would have a hell of a lot of interaction between Spider-Man himself and Frank Castle, better known as The Punisher.

What I actually got was a collection of relatively mediocre stories and a 'blink and you'll miss it' appearance by Frank Castle.

The stories themselves are very poor except for the two part story involving Hammerhead, which was OK for what it was, and a really good story recounting what happened to Flash Thompson while serving for the US army in the Middle East. It's these stories that have earned this poor collection a 3 rating. In fact, if it wasn't for those stories, I would have given it either a 1 or a 2 rating.

The art itself has been praised by many sites reviewing this release but, and I'm being completely honest here, I hated it. The only time the art seemed to mesh well with the story it was a part of was with the Flash Thompson story. In fact, the artwotk there was superb and really gave off a sense of dread and claustrophobia. It's such a shame that the rest of the art was so poor because I really wanted to give it a higher mark just for that story alone.

If I'm going to be completely honest, this release is a bit of a waste of time. None of the main story lines are mentioned more than in passing and even if you ignore this release it wouldn't impact on any thing in Spider-Man's universe.

All in all, if you want a really good story telling you what happened to Flash Thompson while serving in the Middle East or a new take on the origin of Hammerhead then by all means pick this up.

Personally, regardless of how good those two stories are, I don't think it's worth breaking your back trying to find this one.

Very mildly recommended but that's just for the two stories I mentioned. The others are pointless.