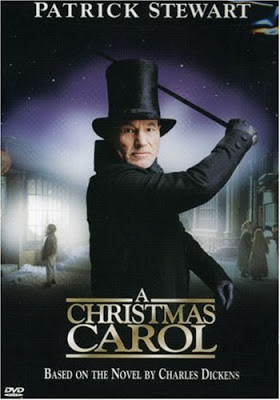 
Patrick Stewart Leads An All Star Cast In This TNT Made For Television Movie.
Ebeneezer Scrooge is a miser in Victorian London.  Nobody likes him and he doesn't like anyone.  When the special time of year known as Christmas comes round, Scrooge thinks it's business as normal.  Little does he know that he's about to get some visitors that will change his life.

This version is one of the best I've ever seen. The depiction of Victorian London is absolutely gorgeous, the sparing use of music is inspired and the acting is uniformly great.

The direction in this TNT made for TV movie is way higher than the usual standard for these sorts of productions. He shows a real flair for the subtle little things that really make a scene come to life.

However I would be remiss if I didn't mention the performance by Patrick Stewart. He steals absolutely every single scene he is in as Ebeneezer Scrooge. Sometimes in the movie version of this story it seems to be the norm to over play him, especially when the ghostly visits start to happen yet Stewart plays it with such a subtle grace that you cannot take your eyes off of him whenever he's on the screen.

The special effects are very good, which for a television movie is quite rare. They really seem to have taken a lot of care to make it so that the effects didn't over shadow the action on the screen and it shows.

All in all, one of the best versions of this classic tale that I've ever seen and considering you can get it online for next to nothing, I urge you all to do so.
Movie 5
Picture 4
Sound 4
Special Features 0
Overall 13/20

Posted by Pat Scattergood at 10:58