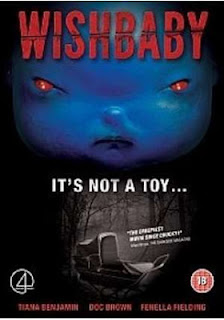 Synopsis
Wishbaby is a savage fairytale set in a contemporary urban landscape. A troubled young black teenager Maxine rescues an eccentric old lady Eve from an unhappy slap by a mixed-race gang of teens and is rewarded for her act of kindness with the gift of a terrible secret: how to make and operate a Wishbaby. With Eve's help Maxine gives life to a magic doll and sets out to solve her current problems, inadvertently releasing Eve's dead Governess from her astral prison and unleashing a storm of supernatural activity. Her older brother Colin is gradually drawn into the dangerous situation created by the 'Little King' and must finally face his own mother in a brutal fight to the death.

Review
This low budget British horror movie tells the story of a young girl living in a part of town full of drug users, pimps and muggers.  When she saves a strange old lady from a gang beating she is offered the chance to make a ‘wish baby’ that will hopefully change her life.  After taking her up on the offer strange things start to happen and slowly but surely, when the woman’s dead governess reappears, it’s obvious that this is one tale that won’t end well.

Don’t be put off by the storyline.  It’s nowhere near as cheesy and weird as it sounds.

Instead the director, Stephen W. Parsons, has created a spooky and atmospheric movie that really harks back to the old days of the classic, supernatural horror movies.  In fact, it takes the same path as another British horror movie called ‘Urban Ghost Story’ in that it really uses it’s gritty and grimy settings to it’s advantage.

The young and mostly unknown cast do an absolutely amazing job.  The best of these being the rapper Doc Brown, who plays the Meth addicted brother of the main character, Maxine.  What could have been quite a clichéd character in someone else hands, Brown handles the character with a subtle slight of hand and really makes him feel believable and realistic.

Tiana Benjamin, who was in Eastenders, plays Maxine with quite a sympathetic air to the character yet by the end of the movie she is such a broken character that you would expect her to fall in to melodrama but that never happens.

In a bit of trivia for all those movie fans out there, the director himself, campaigned for the rating for his movie to be increased to an 18 certificate because he thought that the scenes in the movie would be copied by people watching.

In another bit of trivia, albeit of the tragic kind, this movie was brought some dark publicity thanks to the private life of one of the stars.  Ann Faulkner was arrested after making this movie for the murder of her younger boyfriend after he was ran over but was later acquitted in a court of law.

The  special features here are really good for a low budget Brit horror movie.  You have the trailer for the movie itself but then you have two short movies as well.

The first ‘Rough Magik‘ is a 40 minute short film of a story by H.P Lovecraft, directed by Stephen Parsons that really gets a lot of quality in to it’s short run time.  I won’t give any of the story away here but needless to say, I really liked it.

The second ‘Karma Magnet’ is a 17 minute short film directed by Martin Kemp and starring his brother Gary, that shows that not all actors should be allowed behind the camera.  There are a few good ideas in the story but the execution of them is shoddy, hence why I bumped the special features score down to a 3 instead of a 4.
While it is true that this movie won’t be to everybody’s taste, it’s well worth picking up and having a watch.  If you liked the movie ‘Urban Ghost Story’, then you will most definitely love this one.  Ignore how cheesy the storyline may sound, kick back and enjoy a spooky and rather old fashioned tale that can serve as a good warning that you have to be careful what you wish for.