Slumdroid Volume 2: The Girl Who Took Off Her Skin Graphic Novel Review 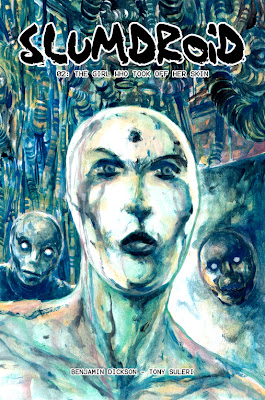 Welcome to Beta Town where martial law is in effect and a tyrannical new Alpha Droid rules with an iron fist.  Sheriff and his mysterious companion must flee or risk public deletion.  But where will they go?

First things first guys.  I am a science fiction geek with some of my favorites being 'Blade Runner' and 'Minority Report' amongst others.

Here in the second volume of the 'Slumdroid' series, Benjamin Dickson has crafted a story that takes the level of quality and wonder that those movies gave me and put that down on the page.  In fact, I would honestly say that this graphic novel stands up to those movies quality wise with no problems what so ever.

With the characters being droids, you'd expect it to be a really tech heavy science fiction story in the mould of a writer such as Phillip K. Dick or someone of that status yet here Dickson has crafted a unique, exciting and yet very heartfelt story.

The relationship between Sheriff and his unique companion comes across as a kind of sibling relationship and that really helps with the fast pacing of the story without leaving anything behind.  The reader can really get behind their relationship and just will them on to freedom.

The other characters are superb.  The brutal and tyrannical Alpha droid that is sent to quell the uprising of the droids is a great part of the story.  It comes across as a character who will stop at nothing to destroy his targets.  With a human character there's always a chance of redemption being used as a last ditch effort by a writer to save the characters that they have created yet Dickson hasn't gone for  that old cliche here.  Instead he has created a character that you really feel with succeed in catching Sheriff.

35 Mechanic, a droid helping the escapees albeit a bit reluctantly, is a good character too and when the shocking ending hits you can't help but be worried for the character.

The artwork is absolutely gorgeous.  It wouldn't look out of place in a frame or on display somewhere.  This is the first time that I have seen Tony Suleri's work and on this note, I will definitely be on the look out to see some of his other work.  He is one of the most impressive talents that I have seen in the comic book world for a very long time and I, for one, want to see a lot more of his work.