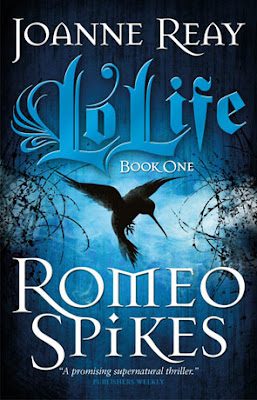 The Tormentas are a brand new enemy in the fantasy genre. They look like regular humans, but in order to survive, they tempt, lure and drive their victims to suicide. Just as their victim commits suicide, the Tormenta comsumes their remaining ''span'' and moves on to the next victim.
Coming in all forms (the beautiful seductress, the tyrannical boss, the charismatic pop star and the unpleasant playground bully), their victims come from all walks of life the lonely old man, the angst-ridden teenager, the star-crossed lover. Nobody is safe.

But there is an age-old secret sect committed to protecting humans from the grasp of the Tormentas. As the power of the Tormentas grow, the two female leader characters in the trilogy - Lola and Bianca - must race against time, and a deadly enemy, to save humanity.

Tapping into the real-world fears that so many people face in life today, and giving form to the temptations and desperations that drive many to take their own lives, Romeo Spikes is both an exciting adventure and a serious comment on the fears which plague mankind.

The Tormentor. A race of supernatural beings that thrive on driving people to suicide and stealing their lost life force. Suddenly their world begins to change and their legend of a being coming in to being and taking over the world starts to become true but what does that mean for the rest of us humans?

Romeo Spikes is the first book of the Lo’Life trilogy and the author Joanne Reay, successful producer and screenwriter, has crafted a debut novel so full of scope that it feels like you can picture everything that happens as a movie. Not surprising considering her day job.

The story moves along at a cracking pace and absolutely gripped me from the very first page. There are many characters to keep track of but Reay has managed to do that with the skill of an experienced author. While yes there are a lot of characters to get used to, not once does the story feel crowded. Despite the fast pace, you are given the time to really get in to the characters heads.

One of the things I liked about that approach was the simple fact that you get so in to the characters that when something does happen to them, and believe me some shocking things do happen, it really does take your breath away.

I honestly can’t wait for the second book. It’s not out until 2013 but even if it’s half as exciting as this one, it’s going to be fantastic.