If I Die In A Combat Zone by Tim O'Brien Review 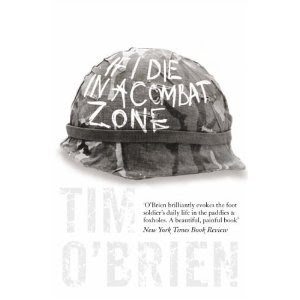 
Perhaps the best book to emerge from the Vietnam War, If I Die in a Combat Zone is a fascinating insight into the lives of the soldiers caught in the conflict.
First published in 1973, this intensely personal novel about one foot soldier's tour of duty in Vietnam established Tim O'Brien's reputation as the outstanding chronicler of the Vietnam experience for a generation of Americans. From basic training to the front line and back again, he takes the reader on an unforgettable journey - walking the minefields of My Lai, fighting the heat and the snipers in an alien land, crawling into the ghostly tunnels - as he explores the ambiguities of manhood and morality in a war no one believes in.

As everyone knows the Vietnam War was one of the bloodiest and most controversial wars in American history. Many books have been written on the subject, some good and some bad. This is one of the former. In fact it’s one of the best I have read.

Tim O’Brien was firmly entrenched in the brutal battles and saw many things that would stay with him for the rest of his life. He talks about all the things that he has seen with such clarity and honesty. He’s also not afraid to talk about the things he regrets about being involved in the war either. For a military autobiography that’s rare and thus very commendable.

Rather than write his tale chronologically, he takes the reader back to the very beginning of his time there from his training, his thoughts about desertion right up to when he got shipped out.

Once in Vietnam he talks with brutal honesty about the effect the many hidden mines have on the soldiers themselves and about the affect on the moral of the group. Neither does he shy away from describing the horrifying injuries that occur because of the mines and various attacks.

Originally published in 1973 to massive critical acclaim that was very deserved, this book has been republished many different times and under a couple of different titles. Sometimes published under its full title of ‘If I Die In A Combat Zone, Box Me Up and Ship Me Home’, it’s definitely worth finding. Highly recommended.