Hobo With A Shotgun DVD Review 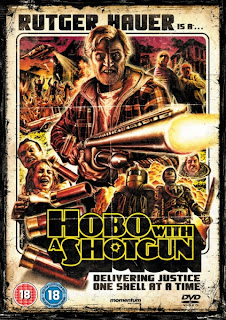 Synopsis
Delivering justice one shell at a time

In a journey to earn his way out of poverty, a homeless man pulls into a city of urban chaos, where crime prevails and the city's crime boss reigns with violent and bloody malice.

Seeing this urban landscape filled with armed robbers, corrupt cops and abused prostitutes, the Hobo soon abandons his plans and turns vigilante in order to deliver justice to this city of filth the only way he knows how - with a 20-gauge shotgun. Mayhem ensues as he tries to clean up the streets and make the city a better place for future generations. However with the city's evil crime boss Drake standing in his way, will the Hobo's own brand of street justice prevail?

Special Features
Review
Hobo With A Shotgun.  Aside from the awesome title, what can we expect from a movie like this?

Gore.  Lots and lots of gore.

The movie started life as one of the fake trailers shown during the Quentin Tarantino / Robert Rodriguez duo of movies collectively known as ‘Grindhouse’ and proved so popular that it was turned in to this, a feature length verson.

While it’s not the most subtle or intelligent of movies there is one thing that it is above all else and that is fun.

If you are a gore hound then this is most definitely the movie for you.  The deaths are extremely brutal and at the  same time inventive with the visceral style of the movie really making the violence and gore quite literally fly off the screen.

The acting is wilding over the top, much the same way that the acting in ‘Drive Angry’ was but when you have a movie named ‘Hobo With A Shotgun’, you shouldn’t go in to this expecting an Academy Award winning team of performances.

Rutger Hauer is superb as the nameless hobo of the title.  Rather surprisingly, Hauer gives the hobo a wisecracking Bruce Campbell style persona and that really ramps up the comedy of some of the scenes.  Even when the violence is exploding all around him, the hobo absolutely owns the screen.  It’s the same with Molly Dunsworth as Abby.  The chemistry between the two characters really does give this OTT movie a heart.  In fact, the relationship comes across as a father/daughter style coupling.

I’d be remiss if I didn’t mention Brian Downey as The Drake, a character that comes across as the love child of a crazy Nick Cage and Jack Nicholson love connection.  He positively chews the scenery each time he appears.  The best of these are when he confronts the hobo played by Rutger Hauer.

Also keep an eye out for the pair of characters called The Plague.  I am seriously hoping for a spin off for them.

The direction and the filming style really brings back the nostalgic feel of the 1970’s and 80’s exploitation movies, in particular the filming style of the movie ‘Maniac Cop’ starring the master of the OTT, Bruce Campbell.

Special features wise, there are some great additions.  Not only do you have not one but two entertaining commentaries, you have the trailer, a making of documentary, deleted scenes and a very interesting alternate ending!

All in all, while most definitely not to everybody’s taste, I found this to be a really fun gore filled movie full of hilarious one liners and some very over the top performances.

If you liked movies like ‘Drive Angry’ or ‘Planet Terror’ then you will enjoy the hell out of this movie.