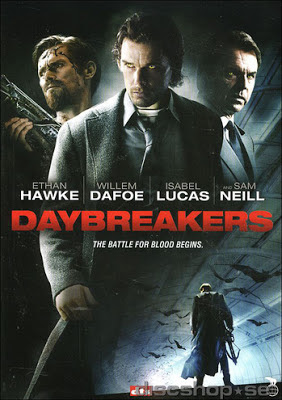 
In the year 2019 the world is overrun with vampires. Humans are an endangered, second class species - hunted to the brink of extinction and then farmed to feed the vampires' thirst for blood.
The remaining humans are in hiding and as blood supplies run low, the terrifying consequences of vampire starvation are becoming more apparent - the normally civilised vampire population will turn into feral blood sucking monsters if a blood substitute is not found.

This is one of the latter. The Spierig Brothers directed a funny albeit not great zombie comedy called 'Undead' a few years back and I enjoyed it so I had quite high hopes for this one.

When I actually sat down to watch this one, what I actually got was an disjointed movie with a couple of good bits fitted in. To be honest, the writing felt like they were gearing up for a sequel instead of just making an enjoyable movie. The ending therefore is obviously open ended but the lead up to it just seemed quite frustrating.

There are some good moments though. The main cast of Hawke, Neil and Dafoe do give pretty good performances but to be honest, they could only do so much with the material they were given.

There were also some really well shot scenes such as the major league feeding scene at the end of the movie. That was visually very impressive. However that wasn't enough to save me from being disappointed by the rest of the movie.

The special features are the same really. The commentary isn't that interesting and the making of featurette just came across as an exercise in them saying the normal 'on look at us, aren't we clever?' spiel.

If you like the Underworld movies then no doubt you'll like this one too but otherwise I'd give it a miss.
Movie 2
Picture 4
Sound 4
Special Features 2
Overall 12/20
Posted by Pat Scattergood at 16:10