An Interview With Joanne Reay, Author of 'Romeo Spikes' 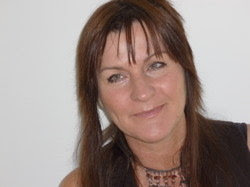 Joanne Reay, accomplished screenwriter and producer has very kindly taken time from her busy schedule to talk with Pat Challis about her debut novel ‘Romeo Spikes’ and about the transition from screen writer to novelist.

PC: Hi Joanne, what made you decide to jump from the world of the screen play in to the novel world?

JR: I wouldn’t say that I jumped. That has a ring of determined purpose to it. I’d call it more of a tumble, as if into a ditch.

PC: Were there any books that influenced you when you were younger and did they have an affect on you becoming a writer?

JR: I was addicted to the Nancy Drew mystery stories. They must have had an affect because whatever I write, there is always a mystery at the core – some dark puzzle that must be solved. I also adored Douglas Adams’ “Hitchhiker’s Guide…” series, but as I read those in my twenties, I don’t think I can count that as growing up.

PC: Some of your movies, such as Gallowalker starring Wesley Snipes, have quite a supernatural theme and you have followed that on here in your debut novel.  Have you always had a passion for the supernatural and if so, have you ever had a supernatural experience?

JR: I’ve always been drawn to the idea of alternate worlds, but I’ve never thought of them as supernatural – just different. As for supernatural experiences, I’ve not had any non-human encounters (apart from dealing with some traffic wardens). However, it often happens that I will imagine an event or some random piece of conversation and very soon after, it will actually occur – just as I imagined it. So there is hope yet that I am a witch.

PC: ‘Romeo Spikes’ started as a screenplay didn’t it?  What made you decide to turn it in to a novel and was it an easy transition?

JR: The screenplay fell into the hands of the publisher and they approached me with the idea of turning it into a novel. I remember thinking ‘Yeah, why not. I write screenplays all the time. How hard can it be to write a novel?” The answer, for those interested, is bloody hard.

PC: Did you need to do a lot of research to create your story?

JR: I’d like to call it research but it was more a trippy drift across the web. I’d start looking into a topic to check some facts and then my attention would be caught by some strange foot-note and before I knew it, hours had passed and I was deep into the works of Tristmegistmus or some other obscure writings. But what was weird was how often these apparently random rides would end up delivering crucial plot points.

PC: While reading the story I was struck by your writing style that made me think of a mixture of Anne Rice and Neil Gaiman.  Has there been any authors that have  influenced you during your life?

JR: It might sound like a cliché, but I have to say Lewis Carroll. If anyone can teach a child that words have a power quite detached from meaning – it is Carroll. As an adult, Martin Amis can make me swear with envy. He’s like some kind of verbal Ninja, knowing just where to place a word to knock you out.

PC: The villains in your dark and fantastical tale, so to speak, called the Tormentor are an absolutely fantastic creation in that while they feel super natural you have written them in such a way that it feels like they could really exist.  What, if anything, influenced you to writing such a character?  Also did you have a favorite character at all?

JR: Have you ever been introduced to someone, shaken their hand and felt a chill run through you? There is nothing more unsettling than sensing the presence of evil, when the person before you looks, sounds and acts as normal. This was the appeal of creating the Tormentors. I wanted people to lose themselves in the story and then suddenly think, Hell – I bet my old boss was a Tormentor. Or my ex-wife. Or my high-school games teacher…As for favourite characters, I love Dali. Such a dandy demon. Trying to be a good guy but that dark streak in him just won’t lay down…

PC: At the moment the world has had a plethora of books with a supernatural back bone to them.  What would you say makes yours stand out the most from the pack?

JR: The Lo’Life series enters the supernatural side of suicide. It has a pulse of reality to it that brings it closer to home.

PC: Without giving anything away, what can we look forward to from the second book in this trilogy?

JR: In Romeo Spikes, Detective Bianco is taken deep into the supernatural world of Lola. In the next book, the roles are reversed and Lola becomes locked into the search for a bizarre and brutal serial killer. As the two worlds of humans and Tormenta once again collide, the investigation takes an unexpected twist into the realm of quantum theory.

'Romeo Spikes' by Joanne Reay is out now from all good book stockists.
Posted by Pat Scattergood at 14:12