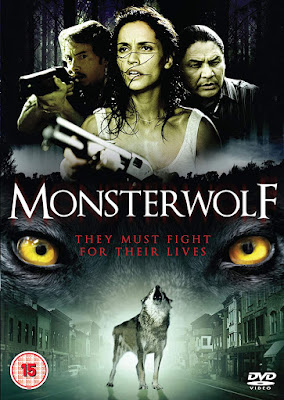 A group of people who represent an oil company find new ground to drill for oil but then accidentally unleash a wolf-like creature. The creature wrecks havoc in the town and can only be stopped by the last surviving native American.

With a title like Monsterwolf, there were three reasons why I picked this movie up on a recent shopping trip. The blu ray was 50p, SyFy channel movies have a reputation for being so bad that they're fun to watch and Robert Picardo from Star Trek: Voyager is in it. I didn't particularly have very high hopes for this one so I went in to it just wanting to be entertained for it's 90 minute run time.

First things first, the acting was very hit and miss. Some of the cast were actually a hell of a lot better than in some of the other SyFy channel movies that I've seen. Robert Picardo gives a wonderfully fun performance as Stark, no not that one, which is only missing a mustache being twirled in the movie villain stakes. Leonor Varela gives a pretty good performance as Maria but tends to like looking off in to the distance with a pensive look on her face.

The thing that impressed me was that they made really smart decisions with their low budget, only showing the wolf sparingly. The effects aren't going to win any awards but I've seen a hell of a lot worse.

Story wise, it's an interesting attempt at making a wolf movie that comes across as a little bit different. I really liked the addition of the Native American nod in the story, which gave it an interesting bit of a back story. When they veered in to 'saving the planet' territory, that side of the movie came across as rather preachy and heavy handed. That said, some of the characters really do take  away from the interesting parts of the story by delivering their dialogue in such a deadpan way that it comes across as them being bored.

The direction by Chapkanov is a bit of a mixed bag. Some scenes are very well done and look like they're from a movie with a much bigger scope and budget but other scenes come across as rushed and clumsy.

All in all, for a low budget movie about a wolf spirit killing people, it's an interesting but not that successful movie to watch. As a movie for the 'cheap and so bad it's fun' crowd then it's worth taking a look, even if it's just for Picardo's turn as the villain.

Posted by Pat Scattergood at 12:46