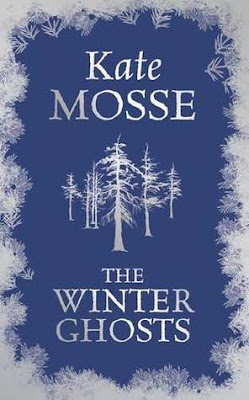 
In the winter of 1928, still seeking some kind of resolution to the horrors of World War I, Freddie is traveling through the beautiful but forbidding French Pyrenees. During a snowstorm, his car spins off the mountain road. Dazed, he stumbles through the woods, emerging in a tiny village, where he finds an inn to wait out the blizzard. There he meets Fabrissa, a lovely young woman also mourning a lost generation.

Over the course of one night, Fabrissa and Freddie share their stories. By the time dawn breaks, Freddie will have unearthed a tragic, centuries-old mystery, and discovered his own role in the life of this remote town.


I was driven to reading this novel after finding it in a second hand bookstore for two reasons.  One, it had a stunningly beautiful cover and two, the synopsis on the back of the book sounded absolutely magical.  I'd been reading a lot of crime and thriller books and fancied a change and this sounded exactly my kind of thing.

Released in 2009, The Winter Ghosts is based on an earlier novella by Kate Mosse called The Cave and takes some of the ideas that she used there in to this story as well as adding more story.

I do love a book that tells a story from a personal point of view and this one does exactly that.  It tells the story of Freddie and his struggles with grief, depression and suicidal thoughts without falling in to the trap of being melodramatic once.  Instead, it gives a grounded and heart wrenching rendition of the thoughts that can invade a persons mental health when faced with the things that Freddie has had to deal with in his life.  The scenes where he sees the ghost of his brother are lyrically and beautifully written and really makes the reader feel like they are involved in the story itself.

The journey in to France that Freddie embarks on to make sense of the new world around him is stunning.  Mosse's easy flowing writing style creates some amazing images in to the readers mind that really gives the story a sense of belonging and realism.

With that in mind, there are some moments where the story time jumps, although I can't explain why as it will be too much of a spoiler, and in the hands of a lesser writer it would come across as jarring yet Mosse makes sure they completely fit in with the narrative and really hits an emotional punch.

Some of the reviews I've read about The Winter Ghosts complain that it is too short a book to have a lasting impression or give the characters time to grow.  I disagree.  I think it's the perfect length and gives such a clear and sometimes concise look at Freddie's journey that you can't help but be sucked in to the story, the emotions and the actions of the characters themselves.

All in all, this was a truly fantastic novel and one that not only did I enjoy but I wanted to read again as soon as I finished it to see if I noticed anything new the second time around.  It's been a very long time since I've read a book that had that kind of reaction on me.