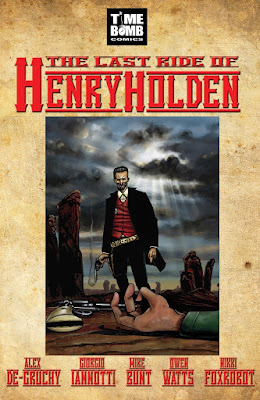 When Henry Holden took what was rightfully his from corrupt landowner John Kelly, Sheriff David Samuels was sent after him.

Three weeks later, Samuels returns with a dead man on his horse and Kelly believes all is once again as it should be in his town.

But with innocent blood on his hands and a tin star on his chest he no longer deserves to wear, Samuels knows a reckoning is coming...


I've been a long time fan of Time Bomb Comics, founded by Steve Tanner, for their sheer variety of genres that they publish.  Westerns, horror, action, science fiction.  They seem to do it all and do it all well yet I hadn't gotten around to checking out this one for some reason.

I managed to pick this one up at a second hand book store and was hooked from the synopsis. I've always been a fan of a good western story despite them having fallen in to the realm of not being popular either in movies or in writing.  It's a shame because when it's done well, a western story can be very entertaining so I had high hopes for this one.

The first thing that struck me with this was the artwork by Giorgio Iannotti and the rest of the team.  It had a rather grimy feel to it, which in places, really added an extra layer to the story and giving an almost laser beam focus on the feeling of dread and regret that ran through the story.  They really showed the toll that Samuels actions had taken on him, both physically and mentally.  I especially liked the little touches like the couple of panels that focus purely on certain characters without having any background.  This gave the scenes an almost other worldly feel to it.

Story wise, the pacing is absolutely spot on.  The story builds to a tragic crescendo that really gives the whole story it's heart and soul.  Alex De-Gruchy has crafted a world full of danger that lives both in the shadows as well as upfront and in places of authority.  The characters are well formed, especially in the case of Holden, Samuels and Kelly.  All of them have their own reasons for the way they acted as well as showing the effects of those actions.  He even makes quite a few of the characters sympathetic despite their horrible actions.

Lettering wise, the work done by Foxrobot is really well done.  The only part of the lettering I didn't like was the font used for the sound effects.  I felt it took you out of the story a little bit as it was slightly too dominant in the signs and took away from the art very slightly.  It's not badly done, far from it, but the sound effects would have worked better for me as a reader if they had been slightly more subtle in execution.  That might just be a personal preference on my part though.

All in all, The Last Ride of Henry Holden, is a brilliant western story as well as being a brilliant release by Time Bomb Comics.  The whole team clearly clicked together work wise and it shows in this slow burning, tragic western so if you can, go pick up a copy.  You won't be sorry.