The Girl With the Lost Smile Review 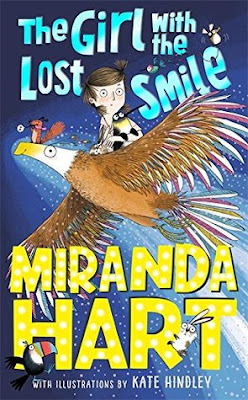 
Chloe Long has lost her smile. She's looked everywhere for it. (Under her pillow. Under her bed. Under her nose. Obviously.)

Until one night, something utterly magical happens - and Chloe finds herself on an adventure that is out of this world.


I've always tried to avoid books written by celebrities as they normally come across as badly written money grabs, obviously with the exception of the David Walliams novels that are largely enjoyable, so I was rather dubious with this one.  I've never been that big a fan of Miranda Hart's comedy or her show Miranda but I figured that as my son is a fan whenever he sees her pop up in the shows he watches then it was worth a read at least.

I sat down and read it over the course of a couple of weeks with my son at bedtime and he absolutely adored it.

From my point of view, the book was a lot better than I was thinking it would be.  One of the first things I noticed was the fact that the book seemed to be written in the same way as she talks when performing on television.  I thought that was a nice touch.  Another thing I really liked was the fact that the story had an actual message to it.  Throughout the story, you are wondering why Chloe is so adamant to smile at absolutely everything and why her smile actually disappears and when you find out, although it is rather telegraphed, it's still a lovely touch.  Pacing wise, there were a few issues throughout the story but it flowed well otherwise.

Characters wise, some of them come out as a little flat but the main characters themselves are pretty well written and have some great moments that both excited my son and also made him laugh like crazy.  The nearer we got to the end of the book, the more of it he wanted us to read, which was a nice thing to share between him and myself.

All in all, even if you're not a fan of Hart herself, this is a book that is well worth picking up.  It has a really sweet story to it with a lovely message at the end of it too that more than held the attention of my son for the entire story, which you can't ask for more than that really.