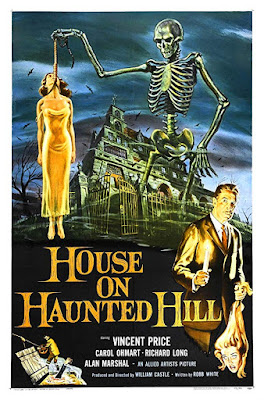 
Eccentric millionaire Fredrick Loren and his 4th wife, Annabelle, have invited 5 people to the house on Haunted Hill for a "haunted House" party. Whoever will stay in the house for one night will earn ten thousand dollars each. As the night progresses, all the guests are trapped inside the house with ghosts, murderers, and other terrors.


I've always been a fan of black and white horror movies.  Karloff, Lugosi, Price, I love watching all the classics and generally love the feel of them.  They always seem to have a sense of gothic grandeur in amongst some hammy acting and melodrama.

With a quality remake in the 90's with Geoffrey Rush playing Price's part, I figured now was time to revisit the original as I hadn't seen it in a very long time but would it live up to the great memories I had from watching it with my dad?

The thing that I like the most about House on Haunted Hill is simply the fact that they make absolutely superb use of their budget. There is nothing fancy about the movie, instead they concentrate on creating a chilling feeling of dread throughout the movie and ramps up the tension in the brisk pace of the story itself.

With a superb cast such as this, you are sure to get some absolutely memorable performances and this movie definitely delivers on that front. Price relishes his role as Frederick Loren, giving the character a feeling of smug entitlement but also gives him a feeling of sympathy in parts despite some of the stunts the character pulls throughout the movie itself. It's definitely the Vincent Price show but don't discount the others. Carol Ohmart is a brilliant foil for Price as his conniving and untrustworthy wife, exuding sexuality and danger in every scene she's in.  Not once does Price still any of the scenes they have together, she not only holds her own but also completely owns her character.

The rest of the cast really give each character their own sets of motives and personalities to such an extent that each one is memorable and plays an important part in the story.

Special effects wise, considering it was the 1950's and obviously there won't be anything high tech, but the practical and fun effects here really add to the overall charm and fun of the movie. My favourite is, by far, the skeleton and even he gets his own billing on the credits list!

If you are a fan of cult and camp movies then this is definitely one to check out. Sadly, William Castle's movies are nowhere near as popular as they should be but be sure to get your hands on this one. It's worth picking up for Vincent Price and Carol Ohmart's battle of wits throughout the whole movie alone.

Posted by Pat Scattergood at 15:31