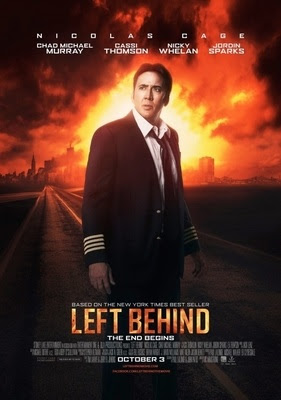 Based on the Novel By
Jerry B. Hawkins
Tim LaHaye


A small group of survivors are left behind after millions of people suddenly vanish and the world is plunged into chaos and destruction.


I have to admit that I've seen so many bad reviews for this movie that it made me a lot more curious about finding out a copy to see if it truly is that bad.

Well, we all know how hit and miss Cage's movies are.  You will either strike gold and have an amazing movie with a great performance or a movie that leaves you wondering just why you are bothering to waste your time watching it.  I wondered which side of the coin this movie would fall on.  To be honest, that was answered in the first half hour.

The storyline itself interested me as it had a real creepy feel to it.  Millions of people going missing without explanation and we're left to try to work out what happened ourselves.  Surely, a story like that would have endless chances to show the build up of tension throughout the movie.  You could show the mental toll that such an event would take on the survivors.

However, what we have is a cast that seems bored while reciting dialogue that is as dull and lifeless as they plan that a lot of the cast are trapped inside.  There are even a couple of scenes where it almost seemed like they were reading them from an autocue of some kind.

A dull story or dialogue could have been forgiven if the cast really put their all in to their performances to bring the characters to life.  Instead, we get performances that are mostly going through the motions, showing us characters that are largely unlikeable.  I know that's the point of the movie, when you find out what caused the disappearances, but it got to the point where I really didn't care what happened to the survivors. Performance wise, none of them really stood out that much at all.  Cage, who will all know loves to hugely overact in his lower budget movies, was really restrained him and actually gave the one dimensonal character of the planes captain a little bit more life than the writing gave him.  Murray gave a fair performance as the investigative journalist too but other than that, I can't even tell you any of the names or personalities of the largely by-the-numbers cast.

All in all, this is a movie that took a rather interesting idea and managed to make it even more dull than watching paint dry.  Definitely one to avoid.

Also, one last thing, why is there always an investigative journalist in these sorts of movie?