A Christmas Carol: The Musical Review 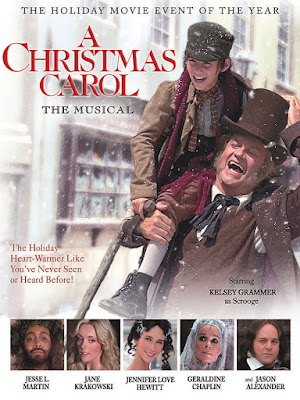 Based on the Novel By
Charles Dickens

Miser Ebenezer Scrooge is awakened on Christmas Eve by spirits who reveal to him his own miserable existence, what opportunities he wasted in his youth, his current cruelties, and the dire fate that awaits him if he does not change his ways. Scrooge is faced with his own story of growing bitterness and meanness, and must decide what his own future will hold: death or redemption.


I've always had a soft spot for the classic tale 'A Christmas Carol' by Charles Dickens.  In fact, I've lost count how many different movies, musicals and even stage productions I've seen of the well told story.  This grabbed my eye because of the cast list.  You have Kelsey Grammer (Frasier), Jane Krakowski (Ally McBeal), Jesse L. Martin (The Flash) and Jason Alexander (Seinfield) amongst many others.

When I started watching it, I was struck by how much it looked like a stage production yet a movie at the same time without feeling at all stilted or awkward.  Kelsey Grammer really gives a wonderful performance as Scrooge, albeit not as powerful as Patrick Stewart did, and also has a really good singing voice too.  The rest of the cast give some really fantastic and subtle performances especially with Krakowski and Martin.  For me, they were definitely the highlights of this musical for me.

Talking of this being a musical, the songs have a real heartfelt quality to them.  The performances of the cast really bring the songs to life and really does pull you in to the story itself, even if you have already seen or heard the tale copious times.

I'll admit that some of the special effects are a little ropey in places but that is just down to the budget really.  They're not terrible, if I'm honest then they're better than some of the other made for television movies I've seen, but they can sometimes be a little off putting in the scene.

All in all, this is a wonderfully warm and gentle musical version of the classic Christmas tale, perfect for those cold nights where you can snuggle under a blanket with a hot chocolate and just enjoy the story unfolding in front of you.

Posted by Pat Scattergood at 09:23