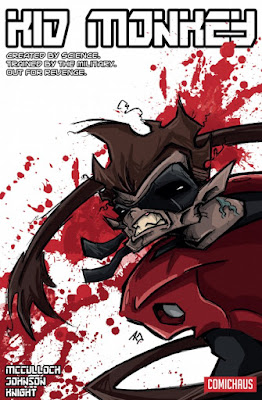 Caine and Abel are brothers torn apart by an incident in their youth. Part of a genetically created crack commando unit, haunted by a past that refuses to be silenced.

Created by Science.
Trained by the military.
Out for revenge.
KID MONKEY


When a writer such as James McCulloch (City of Lost Souls) comes out with a new project then it's always something to get excited about, especially when it's in a different genre to the one that he is known best for.

McCulloch is best known as the author of the superb supernatural horror series City of Lost Souls alongside the artist Janine Van Moosel but here, he's crafted an incredibly fast paced and action packed science fiction story that really does feel like it was written by a completely different person yet still keeping his unique style at the same time.

One of the things that I noticed first about this comic is that while City of Lost Souls has a slow burn feel to the story, Kid Monkey is definitely a balls to the wall affair.  The action explodes from the very first page and really catches the eye in a watch that you won't want to put it down until you have read the rest of the story.

With such a fast pacing, you'd think there wouldn't be enough time for any back story.  Normally that would be true but here, they fit in some little pieces of the puzzle in order to whet the appetite but I look forward to checking out the next installment to get to see more.

Kid Monkey comes across as quite a visceral story so you would need something with an 'in your face' style to match that and that's exactly what we have here in the shape of Paul Johnson.  He has a splendid dirty and grimy style that really brings to mind the sort of style that would be seen in low budget 70's science fiction movies, which I mean as nothing but a compliment.  Johnson's art style, alongside Lauren Knight's fantastic colouring work, really does make the fight scenes and the entire story itself burst off of the page in an orgy of colours and movement.

My only complaint about the title would be that I would have liked the lettering to have have a jagged and dirty style to it.  I get why the creative team went for the lettering style that they used but I just would have preferred a style that was more in line with the art itself but that's more of a personal preference really.

All in all, this is a unique and exciting read and definitely one that is well worth picking up.  I'll be there for the next installment for sure.

You can purchase Kid Monkey: Project Genesis  from here.
Posted by Pat Scattergood at 00:45