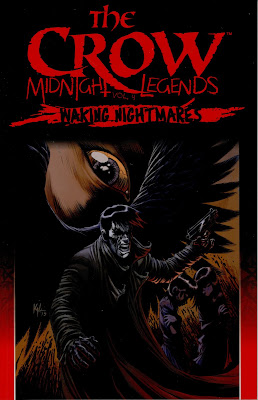 
Can a crow pursue only vengeance, or can he act to save the living?

NYC Cop Mark Leung contemplates this question from the other side after he and his wife are murdered by the Triad, who then take their twin daughters captive.


As a massive fan of the original The Crow by James O'Barr and a lot of the other spin off's, I was really excited to have finally gotten my hands on this one, especially after reading the synopsis and seeing how they were going to mix the mythology of The Crow with that of the Chinese Triad's system of honour.

After reading this one, one thing struck me.  When you read a book or a comic series based in the world that O'Barr created, there's a sense of the familiar yet also a sense of the horrific as well.  With this installment, there were a myriad of absolutely brilliant ideas and some fantastic scenes yet, for some reason, the sum of it all doesn't quite add up to the great story that we should have ended up with.

My main problem with the story is despite the massive flow of ideas that come from the story, there's still the overwhelming feeling of 'been there, done that' to it all.  The story isn't awful, far from it.  The good ideas and the brilliant pacing of the first three issues really do hook you in to the world that the creative team have created here.  However, the pacing for the last year does seem a little off.  One moment, there's gradual build up to something big but then it just seems to jump to the end.  That said, when the ending does hit, it's a good one and absolutely heart breaking.

Art wise, the story comes across as a mix of the original James O'Barr tale but with a more angular style of art.  There are quite a few panels that made me think of the Sin City stories as well.  It felt at times to be too busy and other times the pages were beautiful but in a brutal and violent way.  One of the things that I liked the most was that while the story tells you of these horrific moments, you see a bit of what happens but quite a lot is left to the readers imagination.  I've always been a big fan of that approach and it works very well here.

All in all, this is a good installment in the franchise but also slightly disappointing at the same time.  It's still very much worth a read thanks to the great ideas here, it's just that not all of those great ideas come together as well as they should.

Still, at least it's not The Crow: Wicked Prayer movie.