Alvin and the Chipmunks: The Road Chip Review 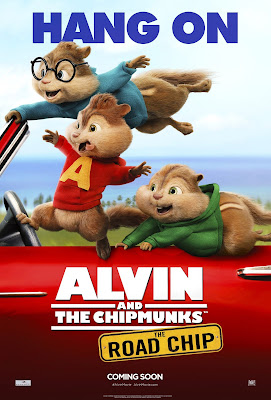 Based on Characters Created By
Ross Bagdasarian
Janice Karman


Through a series of misunderstandings, Alvin, Simon and Theodore come to believe that Dave is going to propose to his new girlfriend in Miami...and dump them. They have three days to get to him and stop the proposal, saving themselves not only from losing Dave but possibly from gaining a terrible stepbrother.


I have to admit that I've not really been a huge fan of the first three 'Chipmunk' movies.  They had their funny moments but for the most part just really there and not all that memorable.  That's why when my little son chose this one as his treat for the cinema trip, I wasn't all that eager.

After watching this one, I have to admit one thing.  I actually found myself enjoying this one.  Is it a world changing movie?  No.  Is it an original movie?  Not at all.  Yet this one had one thing that the other movies didn't.  It had a heart right at the center of it.

The story itself isn't anything new but the cast really do bring the characters to life here and end up making you root for them.  There are some lovely moments in the movie that really tackle the question of what does it take to feel like family.  While they do tackle the question in a sometimes funny way, the cast do really well to give it a nice and subtle flow to the story.

Cast wise, Jason Lee returns as Dave but it feels almost like a little bit more of a cynical and tired portrayal at the beginning of the movie but as the story moves along, you can see that he really puts some subtle little nods in to making his character feel a lot more layered than he has done in the previous movies.  That said, the movie definitely rests on the shoulders of Tony Hale, an agent that is chasing the chipmunks.  He really has a Steve Martin / Buster Keaton feel to his slapstick stunts.

All in all, this isn't the most exciting or memorable movie that I have ever seen but it was far improved compared to the other movies and my little lad loved it so what more could you ask for from a family movie?

Posted by Pat Scattergood at 08:21