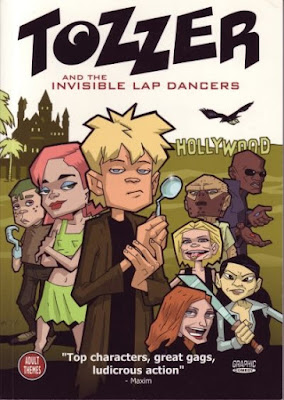 Art and Cover By
Peter Lumby


Follow Tozzer from trailer park to Tinseltown. In this hilarious, pop culture-drenched tale, Tozzer is an 11-year old boy living in a trailer park, surrounded by the deadbeats of the entertainment industry, somewhere in the southern states of America.

He's obsessed with becoming an illusionist, and dreams of leaving his trailer to make a name for himself in the glamorous world of simulated magic. Tozzer finds out about an audition at the exclusive Boarboils School of Drama, in Hollywood. He grabs this opportunity and travels to the school, where, after a painful selection process, he's accepted, he finds getting to Boarboils was easy.

Now can he avoid being hacked to death by S&M, the insane rapper? Magic, movies, and mayhem! Now he has to solve the mystery of the vault before the school explodes.

Tozzer and the Invisible Lap Dancers is an 80 page graphic comedy, bulging suggestively with cheeky film references and parodies. As the extraordinary plot unfolds, Tozzer comes into contact with various Hollywood celebrities, some of whom are teachers at the Boarboils School of Drama.


I have to admit that I have never heard of this title or the creative team involved but after seeing it in a clearance bin at my local comic shop, I thought it looked interesting enough to take home and give it a read.  I mean, it was next to nothing price wise so there was no way that it would be a waste of money considering how cheap it was right?

Now I love parodies, spoofs and all that kind of thing.  Sometimes the worse the better in a 'so bad it's good' kind of way.  I was hoping for more of the same here but this one just stayed firmly in the 'so bad' category.

The story itself takes the one note joke of creating awful versions of pop culture and movie icons and giving them silly names based on their real life counterparts and runs it in to the ground.  It's the graphic novel equivalent of someone nudging you every couple of seconds and asking if you 'got it' after telling you a rubbish joke.  At 80 pages, it's not the longest graphic novel I've ever read but boy did it feel like it was.

The characters themselves are awful, mirror images of their real life counterparts.  The only one that I found funny was Anthony Hopkins as Animal Lecher.  Yes that is the level of intelligent comedy on show here.

Art wise, the story does have some pretty good and colourful moments but overall it still falls in to the ham fisted and lazy manner trap that the writing fell victim to.

All in all, this was a massive waste of money, which considering I got it for mere pennies, that's a real surprise.  They did cram a massive amount of movie and pop culture references in to the story but it's a shame that they did so in such a ham fisted and unimaginative way.  Definitely one to avoid unless you enjoy wasting your time and money.