The Rainbow Orchid: Volume One Review 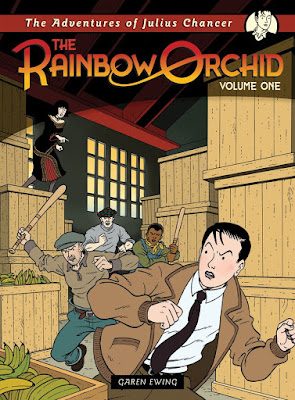 Written and Illustrated By
Garen Ewing


Follow our hero, Julius Chancer, as he embarks on a hazardous quest for the rainbow orchid – a mythical flower last mentioned by the ancient Greek philosopher, Theophrastus, and steeped in legend. His epic journey takes him from 1920s Britain to the Indian subcontinent and its mysterious lost valleys.

Garen Ewing’s stunning graphic novel series blends classic storytelling and historical drama with cinematic artwork in the same vein as the great Herge. An Adventure series not to be missed.


I've been a massive fan of the old Blake and Mortimer tales as well as the Tintin stories since I was a little lad and ever since then have been looking for something else that would not only fall in to that genre but also stand shoulder to shoulder with those tales.

With The Rainbow Orchid, I firmly believe I have found such a title.

The first thing that struck me was the simple fact that the art style really gave me the immediate, warm feeling of nostalgia that the Tintin stories has but that's really where the similarity ends really.

In The Rainbow Orchid, we are treated to an absolutely rip roaring adventure that not only the titles that I mentioned before have but also made me think of the old fashioned black and white movies that I love so much.

The story itself moves along at a massively quick pace due to the title only having just over 30+ pages but those pages are absolutely crammed with panels.  Some have up to 13 panels on the page.  Normally that would look cluttered and too busy but that's not the case here and that is down to Ewing's superb writing and art.  The story moves along like you're watching a classic Saturday morning cartoon.  That's most true of the main character of Julius Chancer, our hero of tale but there are some standout characters as well.

There are some fantastic scenes that will both keep you on the edge of your seat but will also have you laughing like crazy.

Art wise, this first volume of a three part story really does have a classic vibe to it.  There are wild splashes of colour and action through out the first volume that really does feel fresh and exciting while keeping the feeling of a classic adventure tale.  Superb.

All in all, with this being the first volume, I can't wait to see just what the character of Julius Chancer is going to get up to next in his quest to find the famed Rainbow Orchid.