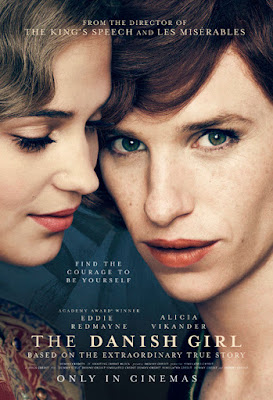 Based on the Novel By
David Ebershoff

A fictitious love story inspired by the lives of Danish artists Lili Elbe and Gerda Wegener. Lili and Gerda's marriage and work evolve as they navigate Lili's groundbreaking journey as a transgender pioneer.


Eddie Redmayne is one of my favourite actors and one of the few people that I will gladly go to the cinema to see so when I read that he was taking on the multi-layered role of Lili Elbe,  I was excited to see just what kind of performance he would bring to the screen.

Based on a fictional account of Elbe's life, and sadly not on her diaries, The Danish Girl is a movie that looks absolutely stunning.  Nearly everything about the setting and the costumes are pitch perfect and really draw your eyes to each and every detail that is put up on the screen.  You could easily watch this movie multiple times and see something new each and every time.  Yet for me, that was part of the problem.  It just looked too perfect.

Some of that problem is the simple fact that it is based on the fictional account of Elbe's life.  Don't get me wrong, it's not a badly made or written movie at all.  In fact, it's a beautiful and heart breaking one but they glossed over a lot of the details that I felt make Lili and Gerda such interesting characters.  Don't get me wrong, I'm not the sort of the person that feels the need to have everything spelled out for him but it did bother me quite a bit that they glossed over so much of Elbe's life considering just how important a figure she is.

Story wise, like I said, it's very well written but quite glossy in places.  That said, it's very well paced and utterly heart breaking.  To see the transformation of Redmayne in to Lili is the strongest part of the story and they have written that well as well as the way the relationship with Gerda changes.  I would have liked to have seen more of that to be honest and to have seen a bit more about Gerda's life but obviously you can't fit everything in to a movie and please everyone.

However, what ever problems the script may have had with glossing over certain facts or omissions, the cast more than make up for it with their down to Earth portrayals of the characters themselves.  For me, Vikanda as Gerda was an absolute tour-de-force of emotion and yet there were some amazing scenes of just subtle facial expressions or slight changes in how she delivered her dialogue.  It was also her chemistry with Redmayne that created a relationship that you couldn't take your eyes off of whenever the pair of them were on the screen together.

Redmayne, after his success at portraying Stephen Hawking, portrays a character with such a gentle touch and a delicate performance that it was almost like you were watching Lily come to life as the movie progressed.

The rest of the cast did seem secondary in places though, thanks to the performances by Redmayne and Vikanda, but I wouldn't say that there were any bad performances in the entire cast.  You can't say that for a lot of the movies coming out these days.

All in all, this is a good movie and one that I would see as a good starting point to learn about Elbe from.  However, because of the omissions and the glossing over of certain moments, I would suggest maybe reading her diaries as well to get a fuller picture.