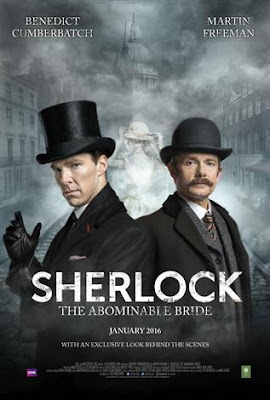 
Imagining himself back in the 1890s Sherlock is visited by Inspector Lestrade, after newly-wed Emelia Ricoletti, having apparently killed herself in public, murdered her husband Thomas in front of witnesses before vanishing.


After such a long wait from the shocking ending of series three of Sherlock, the 2015 holiday special was always going to have a massively uphill battle to whet the appetite of the shows fans.  That's when it emerged that it would be set in the Victorian era and not the modern day like the fans were used to but why would they take that route.

However, after watching the episode itself, I have to admit that not only does the tale work superbly well as a stand alone story, it also links in to the series itself in a brilliantly clever way.

Let's not get ahead of ourselves however,  The story itself is a well written and well paced mystery for Holmes and Watson to try to solve.  The show has become known for presenting it's twists and turns in a sly and sometimes even cynical way and that is done here to great effect.  At first you are watching the mystery unfold before your very eyes and  then they throw you for a complete 360 with an offhand comment or reaction.

With a show known for being set in the modern day to tackle a historical story, it was always going to be tough to juggle both time periods.  Here, they do both with a sense of style that will not only impress fans of the show but also hook in people that may not have seen any of the previous stories too.

Cast wise, all the usual suspects are here and they all do a great job of transplanting their modern day personalities in to a Victorian setting, including one in a way that you may not expect.  That said,  this is by far the Cumberbatch and Freeman show.  Not only do they recreate their characters that fans of the show have come to love but they also make them subtly different in the new setting but do so without losing what made them popular to begin with.  There's also a character return that is both ridiculous and bonkers yet it works perfectly but I won't spoil that for you here.  Just watch it to see what I mean.

All in all, this was a brilliant return for the most famous detective ever created.  That said, this brilliant story does have one major problem.  If this one off holiday special was this good, then the returning series has a hell of a lot to live up to.