Papercuts and Inkstains: Issues 3A and 3B Review 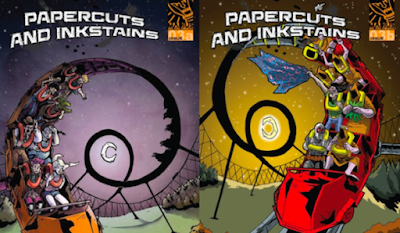 
In the first of our double feature, issue 3A, you will be greeted by the mind meltingly beautiful cover from Rosie Packwood (whoever it was who trusted that bunch of reprobates on a rollercoaster clearly didn’t do their homework). Issue 3A features 3 completely brand new stories and in essence functions as a stand alone issue (this one’s for you, haters of continuity). The first story, written by Rob and Mike, and featuring art from the incredible Angela Sprecher is a fast paced Wild-West casino heist called ‘A Roll of the Dice’.

We find out what happens when a small town bar owner decides to fight back against the oppressive cash-munching casino that’s moved into the area. I love it when a plan comes together! Next up, we have the breakneck ‘Vampire Wonderland’, again written by Rob and Mike, this time featuring art from the brilliant Paul Moore.

The world has changed, the vampires are here, and they are HUNGRY. We are thrown headfirst into a young woman’s heart pounding supply run. When vampires are everywhere, the survivors have to get creative to stay alive. We cap off the first of our issues with the return of the aforementioned aficionado, Rosie Packwood. The final story is drawn by the wonderful Rosie, and written by the sort-of-wonderful, Mike Sambrook. What starts out as a regular teenage road trip takes several strange turns and leads you to places you’d never expect. Everybody’s going on ‘Slaycation’! The horror!!

More mentalness than you can throw a sticky stick at...


In part B of the double headed beast that is Issue #03...THERE'S MORE MADNESS!

The minute you gaze upon the face of 3B you will taste the shoe leather of frequent friend of Madius, the effervescent Mike Smith’s boot-to-your-chops. Mirroring the wonderful Rosie’s cover for 3A, we get a sneaky look at the kind of shenanigans we can expect inside. Many shenanigans! The art for 3B’s cover was a collaboration between Mr. Smith (on line art) and family friend, Jim Lavery (on colours).

The first tale in our second helping of awesome is written by Rob and featuring art from the magnetic Dan Butcher, who you may remember from the fantastic Papercuts 1 cover. In this story, entitled FPS, we dive right into the body of our character and experience it as ourself. Told from a first person visual perspective we get a harrowing tale of an invasion into enemy territory. Forces collide, world views collide. It’s gonna get ugly.


Following this we have a Papercuts return for Nick ‘I can fit twelve eggs in my mouth at once’ Gonzo on writing duties, teaming up with the wonderful Brian Burke to bring you Madius’ first foray into capes. But hey, this is Madius, things were never going to be straightforward, were they? ‘The Perplexity’ isn’t yo momma’s superhero! Then, just when you thought it was nearly over. THOSE DAMN PROFITS OF DOOM SHOW UP. They are back. They are still useless. As always, written by Rob Jones & Mike Sambrook and featuring brilliant art from Mike Smith. How’s the apocalypse shaping up? Spoiler, it ain’t going well. We get the hotly anticipated third installment from our favourite hooded idiots.

With so many stories to get through in this review, let's jump straight in.

Issue 3A of the superb Papercuts and Inkstains anthology series starts with a comedy western called A Roll of the Dice.  This one has a swift pace and a great, almost classic cartoon feel to the story of a group of people that are best described as bumbling idiots that take on a big corporation.  The thing that struck me the most was the simple fact that it made me feel like a team of Buster Keaton, Charlie Chaplin and Laurel and Hardy type people going on a mission.  The humour comes thick and fast in this story and while not all the jokes hit the mark, this is still a good story to start the issue on.

The second story, Vampire Wonderland is a completely different type of story.  It's a sarcastic, almost cynical take on the well worn vampire genre.  The thing that I liked the most about the story was the simple fact that they didn't go the cliched route with the vampires, instead focusing on the inner monologue of the main character Sabi.  This lead to the story moving along very quickly but also left me wanting more as a reader.  The superb and sometimes stark art really brought the story to life and made it one that was incredibly memorable.


The third and final story of the issue is a story called Slaycation.  This one is a story that's rather hard to explain without giving the HUGE twist away but let's just say don't judge it by how you think it is going to go.  We have all seen and read stories about a group of friends who go to a cabin in the woods right?  Well, this is one of those stories but also isn't one of those stories.  Take everything you think you know about that kind of story and throw it on it's head.  It's that good a story.  The strength of the story is compounded by the sheer brilliance of the art itself.  Simple in some places and incredibly detailed in others, this is by far my favourite of the three stories in this one.  Well worth picking up this issue for this story alone.

While I think A Roll of the Dice is the weakest of the three stories, that's not to say that it's a bad story or that it lets down this collection because it doesn't.  It's just that the other two stories are so good that it gets left behind a little bit.


All in all, issue 3A is an absolute blinder of an installment to the anthology series.


The first story in the second issue three installment is a rather unique one called F.P.S. and is told completely in a first person point of view.  This leads to some rather unique visuals and that's the main hook that this story rests on.  The writing is strong for this short story but it definitely rests on the art.  I think it's one of the most interestingly drawn stories in the Madius Comics catalogue.  There's a great final stretch to this story and one that makes the story well worth reading.

The second story is The Perplexity and it's one that I really can't decide if I enjoyed or not to be perfectly honest.  It starts off as a stereotypical bank heist story but then turns weird very quickly and for the most part, it works.  You're left feeling a little disorientated for a better word and that leads to you wondering just who the good guys are.  My one problem is that the story came across as a bit too preachy in places.  Yes, the character sprouting almost sage like quotations is supposed to be as such but it wore a little thin for me.  That said, the story moves at a good pace despite being much more dialogue heavy than the other stories and there are some superb deaths as well so horror fans will really enjoy that side of the story.


Finally, and obviously saving the best for last, the Profits of Doom return in their third installment.  It was very much a welcome return for one of the funniest sets of characters to grace a Madius Comics release.

The thing that makes them so popular is that their stories are so utterly ridiculous.  They are the biggest and most inept set of people that you would ever expect to meet yet alone at the end of the world, especially in a story that involves a T-Rex, a gigantic cat, a human meat ball and more.  This is by far the crown jewel of the Papercuts and Inkstains anthology series and one that I always look forward to reading.