Back to the Future: Issue 1 Review 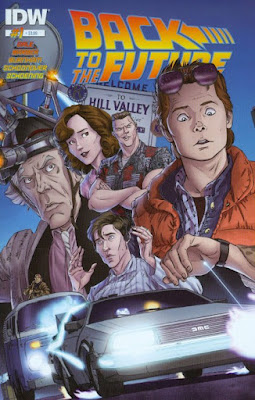 
“Untold Tales and Alternate Timelines,” part 1: BttF creator/screenwriter Bob Gale returns with all-new tales from the twisting and turning timeline that made Back to the Future a, well… TIMELESS pop-culture phenomenon!

Take a trip back to 1985 and be there when Doc Brown and Marty McFly first meet, and then jump even farther back, to 1945, to witness Doc’s involvement in the super-secret Manhattan Project.


When it was revealed that IDW Publishing was going to be releasing a comic book set in the world created during the classic Back to the Future trilogy, I was a little hesitant to take a look at it purely for the fact that it felt like it would end up being a bit of a cash in.

Instead of getting a half arsed cash in, we have gotten an anthology series that will deal with, or at least in this case, the back stories of the two main characters in the shapes of Doc Brown and Marty McFly themselves.  We've also got the great Bob Gale involved as well so I slowly started to have some high hopes for this one.

In the first story, we are given a look at just how McFly came to meet Brown for the first time.  Gale and Barber deliver a story here that is a definite treasure trove for the fans of the movies and you get some truly wonderful nods to the original movies there too.  I won't reveal them here for the simple fact that it's a great thing to read through the issue and find them for yourself but for me, as a fan of the movies, I found it put a smile on my face.

Story wise, they don't deliver any bombshells or go for anything particularly exciting per se but that's why the story works well.  They know what made the movies so popular and that's what they have given us.  You will, if you are anything like I am, here the dialogue in the characters voices themselves because they have absolutely nailed the personalities here.

In the second story, we get to see a young Doc Brown in his element as a lecturer of sorts.  I loved the fact that they tied his character in with a real life event but managed to pull that together without it seeming hokey or over used.  We see a little bit of Brown's involvement with the Manhattan Project and I'm looking forward to seeing where they take that part of his life.

Art wise, the two stories are completely different style wise.  In the first story, When Marty Met Emmett, we have a slightly cartoon style to the art and it works beautifully well for the comical slant the story takes.

For the second story, Looking For a Few Good Scientists, we have a slightly more conventional approach to the art to go along with the more serious tone of the tale.  While that works, and it looks great, I couldn't help but be more impressed with the first story.  That's not to say that the art is bad because it's not, I suppose it's just down to personal taste really.

All in all, this isn't a title that is going to rock the comic book world in the slightest.  However, if you are a fan of the movies themselves, then you will find a lot to make you smile.  It keeps the atmosphere of the movies as well as putting some wonderful nods to them in the stories themselves so it's well worth picking up.