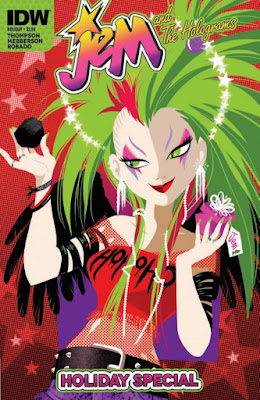 
When Jem and The Holograms and The Misfits draw each other in their shared record label's gift exchange, heads will roll or is the holiday spirit getting to even the bitterest of enemies?


I have to admit that I'm not all that familiar with the Jem and the Holograms comic but thanks to my little lad taking an interest in the television series from the 1980's, we figured we would start giving the issues a bit of a go.

With this one being the holiday special issue, the idea of a one shot story felt like the perfect jumping on point to see if we would like the series as much as the show itself.

The first thing that struck me was the bright, colourful style of art that they have gone for.  It's got a real cartoon style vibe but also harks back a little to the bright and bombastic style of the television show.  The characters look like their television counterparts but also have a nice and up to date vibe to them as well.

Writing wise, the story is actually quite surprising in that while it works so well as a one off, it also works for the fans of the characters too.  There are some really lovely moments where the characters really come in to their own.  This is most present in the scene where all the characters open their secret Santa gifts from one another.  Not a single one has the same response.  In fact, their personalities really shine through in their reactions.  It's a beautifully simple but effective bit of writing and really shows why this comic book series is so popular with the fans.

I'd be remiss if I didn't mention the relationship between Stormer and Kimber.  Not only did it bridge the divide between the bands but also gave the comic some of the gentle and really lovely moments that showed just how special this time of year can be.

All in all, while this isn't exactly a groundbreaking comic, I really enjoyed this one.  Considering I'm a novice in the world of Jem and the Holograms, I loved the simple stand alone nature of the story but I also loved the fact that you could clearly see that the creative team really like the characters and are bringing their 'a' game to the title.  Definitely one I'll be picking up again to read alongside my little lad.