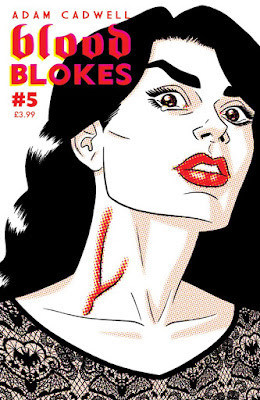 Written and Illustrated By
Adam Cadwell

Back Cover By
Danny Zabbal


In this penultimate issue hapless new vamp Vince drops in on his human ex-girlfriend Jane while his undead housemates search the student indie night clubs of Manchester looking for him.


When I first picked up the first couple of issues of Blood Blokes by Adam Cadwell, I have to admit that I wasn't at all sure what to expect from it.  After reading through the first four issues, I was blown away at how quickly the characters grew and turned in to a cast that I wanted to read more of.

In this issue, we're dealing with the aftermath of Vince realising that his life will never be the same again and he implodes for what of a better word and tries to run away from it all.  Here in issue five, we see the character of Vince really do some great character growth and it's great to see him in a slightly different light.

If you were a fan of the darkly comedic moments in the first four issues then you are in luck here.  Not only does Cadwell keep the humour firing on all cylinders, there are some great little nods to other movies and television shows in there too so it was fun to see those as well.

Art wise, the stark black and white nature of the art style here really works to the advantages of the panel work.  There are some great angles used and the way Cadwell uses the shadows to give the pages depth as well as a sense of dread while maintaining the comedy is fantastic.  A lot of that is down to the interplay between the characters and their facial expressions too.  Sometimes Cadwell goes for the sharp dialogue and other times he just goes for a facial expression and that really gives this issue the best pacing of the series by far.

There are some great guest pin up's here that really work next to Cadwell's art despite being completely different styles.  I've always loved it when a comic book has a sample of another artist's work because it gives the reader a chance to see new work that they may not have otherwise seen and I, for one, will definitely be checking out their work as well.

All in all, this is a great issue and one that was well worth waiting for.  Let's hope that issue six finishes off the series with a bang,

Blood Blokes: Issue 5 as well as the other issues, are available from Adam Cadwell's Store
Posted by Pat Scattergood at 10:18