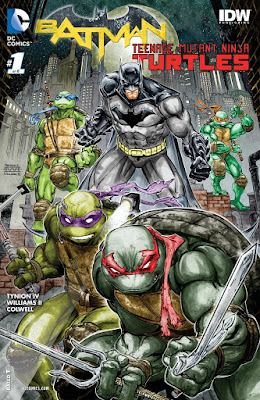 
DC Comics and IDW team up for the crossover you never saw coming as two of the greatest entertainment icons meet for the first time!

In Gotham City, a series of deadly raids leads Batman to believe he’s up against a group of highly trained ninjas known as the Foot Clan!

Somehow, they’ve crossed over to another dimension and are determined to take advantage of the situation while looking to get back home. But they haven’t come alone: Leonardo, Raphael, Donatello and Michelangelo are hot on their trail.

Get ready for excitement as heroes and villains from both worlds clash and team up in an epic battle that threatens the very fabric of reality!


When I saw that DC Comics and IDW Publishing were going to team up and do a cross over mini-series featuring both Batman and the Teenage Mutant Ninja Turtles, I have to admit that I really wasn't all that sure where they were going to take the characters or the story.  In fact, I was rather hesitant to take a gamble on it because I figured it would just be a rather cheap cash in with two major movies featuring the characters on the way to cinemas next year.

However, I grabbed it out of sheer fascination and to see if it was truly as bad as my mind was making me think it was going to be.

Well, I am glad that I took a chance on it because the two vastly different sets of characters, that I thought would clash terribly on the page, work very well.  In fact, they both feel completely at home in this story to such an extent that I am eager to see where issue two is going to take the story.

Story wise, the flow of the first issue does concentrate a little heavier on the Batman side of things but there is a lot here to whet the appetite of the Turtles fans too, including a scene involving Killer Croc that I am hoping will pan out how I would love it to in a later issue.  There are also some great moments between the Foot Clan itself and Batman that will hopefully lead in to an altercation between Batman and Shredder.  That really would be a fight to be seen.

The tale itself is also an interesting one.  It's true that it seems to be following the well worn path of inventions being stolen in order to put in place a bigger plan but the pacing and the fact that the characters work so well in this easy that make it such an interesting read.  I have no idea if the very good balancing act that this issue has done will continue on in issue two when the interactions between the different characters increase but this issue handles it well.

Art wise, this one manages to both have a very clean look to the panels yet still have the grimy and seedy look that befits the world of Gotham City.  I loved the bulkier, meaner look to Batman and the darker look given to the Turtles as well as the superb use of the settings to make the story come alive yet for me, something just felt a little off but I couldn't quite put my finger on what it was.

All in all, this one is definitely a good start to the mini-series so I'll definitely putting my hard earner pennies down to get issue  two.